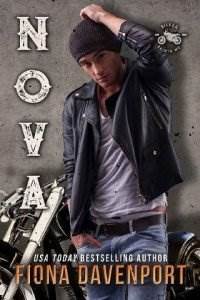 I jumped when the librarian set her hand on my shoulder since I hadn’t heard her approach. I’d been sucked so deep into the fictional world of the book I was reading that I had blocked out everything around me. “Sorry, sweetie.”

“No worries.” Twisting around, I smiled up at her.

She tapped the face of the watch wrapped around her frail wrist. “It’s fifteen minutes past closing time. I’ve already shut everything down and am ready to head home.”

I snapped my book shut and stuffed it into my backpack. “Thanks so much for letting me stay late. I really appreciate it.”

“You’re always welcome here,” she assured me as I stood and headed toward the front door.

“Thanks again.” I gave her a little wave before I walked outside and started the familiar trek to my house. I used to spend most of my time outside playing sports at school or hanging out with friends. Nobody would’ve ever said I was a library kind of girl, but ever since my world crumbled around me, it had turned into my second home.

Since my parents never split up like so many of my friends’ had, I hadn’t realized my mom was the type of woman who needed to be in a relationship. Not until she married my stepfather barely a month after my dad died. I was still devastated by his loss, but apparently, she’d started dating again while I’d been lost in a sea of grief. I hadn’t even met the guy before he moved his stuff into our house and introduced himself to me as my new dad. Talk about a what the heck moment.

I was more than willing to admit that I hadn’t been very welcoming to Chad, but I didn’t think a reasonable person could blame me for my attitude. I’d spent my entire life being a daddy’s girl, and it was a huge slap in the face to have some stranger stroll into my life so soon after he was gone and expect me to treat him like my father.

My bedroom had been my haven in those first couple of months after my dad died, but that was before Chad decided he didn’t need to knock before coming in to see what I was doing. I didn’t think about it too much the first few times it happened, but I got super creeped out when I realized my stepfather felt as though he had the right to come and go from my room whenever he wanted. After that, I started locking the door when I was in my room...and staying away from home as much as possible. But there were only so many places a seventeen-year-old girl could hang out without anyone asking too many questions, and I didn’t want my friends to know how bad things had gotten at home.

My pace slowed the closer I got to the house I’d grown up in, to the point that my feet were practically dragging on the sidewalk. All of my wonderful memories had been replaced with bad ones, and the bitterness had grown inside me to the point that I wasn’t sure I could wait until graduation before I took off. I turned eighteen last week, so nothing was technically forcing me to stay—except for a lack of money.

My dad had always taken care of the finances, and it hadn’t taken long for things to fall apart after he died. If my mom had been expecting Chad to take care of us, she’d picked the wrong guy to marry. My stepfather hadn’t held down a job for more than three weeks since he’d moved in with us. His favorite pastime was knocking back a twelve-pack of beers before stumbling upstairs to sleep off his drunken stupor. Showing up late in wrinkled clothes had apparently not impressed any of the bosses who’d fired him. Go figure.

I heaved a deep sigh of relief when I reached our driveway and saw my mom’s parked car in front of the garage. I hated when it was just my stepfather and me. At least when she was there, my mom acted as a small buffer between us.

But it also irritated me that she was forced to park there. It was just another symbol of how Chad had taken over our home and treated it as though he belonged there more than we did. He’d even sold his old junker, started using the car my dad had meant for me, and somehow came up with enough money to buy himself a motorcycle. He kept both vehicles in the garage and made my mom park outside, even in the rain or snow, instead of manning up and making sure she had space to park in the garage. My stepfather was a selfish jerk who refused to lift a finger to make her life even a tiny bit easier. And the worst part was that there would have been more than enough room if he had spent an hour at most rearranging his tools and a bunch of boxes with his crap so his motorcycle would fit on the other side of the car that should have been mine.