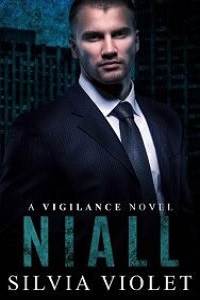 I disliked Marco Ricci from the moment we met. He was part of the team my boss had assembled to takedown an arms dealer. I first noticed him when he gave me a slow once-over as I walked into the warehouse where everyone had gathered to be briefed on their roles for the night.

Marco was an ally of a powerful mafia family—the Marchesis—who were also assisting in the takedown. His own family was also heavily involved in organized crime, but my intel said he’d broken ties with the other Riccis years ago. Marco wasn’t a nice man, but from what I could tell, he was just as interested in putting this arms dealer out of business as Vigilance—the underground group I belonged to—was.

I was former FBI, but I no longer worried about most of the illegal activities going on around me. Even when I was with the Bureau, we never thought we could bring down every criminal. We focused on the worst of the lot, which meant we sometimes worked with those who knew them best.

Marco primarily earned his living running a pawn shop that did legitimate business but also served as a base for fencing stolen goods, but that wasn’t my concern. What made me dislike him was his attitude. He scowled at me, rolled his eyes, and generally made it clear he couldn’t be bothered to listen to me as I explained our objectives.

When I got to the overview of the plan for storming the facility where the dealer kept his inventory, Marco appeared to pay more attention, but as soon as I finished speaking, he gave me a scathing look and said he hoped I wasn’t going to wear the suit I had on since it screamed fed and would tip the gun runners off.

I didn’t bother replying to him. “You have your orders,” I said by way of dismissal.

Marco just smirked at me.

That night when we went in—with me wearing black cargo pants and a black t-shirt, not a suit—I got pinned down. I was alone behind a stack of crates and taking fire. I would have to expose myself to get free, and my comm had gone out. Someone started returning fire on the enemy from the closest doorway. I realized it was Marco.

He took out two of the guys, and once I reached the doorway and had a better line of sight, I got the third.

Our gazes met, and for a moment, my body heated. Then I shook my head and turned away. No way in hell did I want this annoying man, even if he was hot as hell. His dark hair was just long enough to have some curl, and he didn’t bother to control it. He had a scruffy beard and his eyes… They were almost black and too easy to get lost in.

Marco lifted a brow, but a second later, his expression turned serious. He pointed to his ear. Someone was speaking to him. I kept lookout as he listened.

“He’s with me. His comm’s down…Yes, we’re clear.” He smiled and turned to me. “We got the bastards.”

We high-fived, and that simple contact sent electricity down my arm. That was so not good. At least Marco wasn’t someone we worked with regularly. Maybe I’d never have to work with him again, because there was no way in hell I was going to act on this strange attraction.

The team met up for debrief, and when that was done, I heard some of the guys talking about going out, but I wanted a long hot shower and some quiet. A lot of guys like to party after a successful mission, but I usually needed either time to think it all through and reflect or a good, hard fuck.

I was about to head for the SUV I’d parked down the road when Marco called out to me.

“Are you going out for drinks?”

“Probably best. The bar’s in a sketchy part of town. You wouldn’t want to get any smudges on this perfectly pressed shirt, would you?” He brushed his hand over my chest, and the heat of it almost made me step back. My traitorous cock began to swell, and I tried to think of anything but how earthy and masculine he smelled as he stood much too close.

“You’d rather go home and jerk off over your closet of suits or stacks of spreadsheets or something?”

Anger had me tightening my fists.

“Do you want to take this somewhere else?” The words seemed to shock him almost as much as they did me.

When he managed to close his mouth, he nodded. “Fuck yes.”

“Did you drive here?”