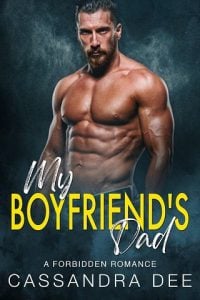 My boyfriend, Stewie, and I spend almost all of our time at his house. It makes no sense because I live in an apartment with one roommate who’s almost never home, so we’d have a lot of privacy. On the other hand, Stewie lives with his father who is pretty much always home, so we could be interrupted at any moment. Not that I hate my boyfriend’s dad, but still. What if Julian walks in while things are getting hot and heavy between me and his son? That would be so embarrassing.

Yet tonight, we’re at his dad’s house again.

“What movie should we watch?” Stewie asks with a disinterested yawn. With his black hair and blue eyes, my boyfriend is undoubtedly attractive, although he has the pale skin and soft limbs of a professional video game player. I open my mouth to answer, but he just keeps going while fidgeting with the remote control. “I was thinking the first movie in that car franchise that’s been around a few years. You know how much I love the explosions.”

“I thought maybe we could watch something different tonight. Maybe something with more dialogue?”

“Come on, babe, I’ve had a long week. I just want to unwind with some crazy stunts. I don’t want to actually have to think, and you know the dialogue in these types of movies is bad anyways.”

I roll my eyes. That’s my point exactly, but this is how our relationship is. My boyfriend pretends he wants my input, but disregards it in the end. Stewie only asks me as a courtesy, and not because my opinion really matters. I guess it’s nice to be asked, but still, I’m a grown woman! I should have some say at least some of the time. But I cross my arms over my chest and try to keep a smile on my face because I don’t want to get into it tonight.

“Why has it been a long week?” I ask in a placating tone. “Have you been competing a lot?”

My boyfriend shakes his black head.

“Nah, not this week. I did beat that game I’ve been playing, but I didn’t do it live, and you know that doing it live is what counts. But practice makes perfect! I need to keep building up my skills so I can take the world by storm. It’s all about finger strength and hand-eye coordination, you know?” he asks, flexing his digits to show me.

I conceal my sigh. After all, my boyfriend may have a strange job, but at least he has a job. Of course, Stewie has yet to make any actual money playing video games, but who knows what can happen? I keep encouraging him to branch out because maybe he could get some endorsements or even earn some ad revenue from starting a website, but Stewie’s adamant. He considers himself a “pure professional” and doing anything other than playing video games would be “selling out” and “untrue to his gift.” To me, it’s just called being smart.

“I’m sure your finger strength is plenty fine,” I say a bit testily. I’m trying to be supportive of Stewie’s passion, but it’s really hard when I have to pay for almost all our dates. It’s tough because I don’t make that much waitressing at a diner, and I have a ton more bills than Stewie, seeing that he lives at home still.

But I don’t feel like fighting tonight. I’m just too tired from my shift, and so I keep my mouth shut as Stewie flips on that stupid car movie. As the opening scene begins, my heart sinks. This is going to be really bad, seeing that the opening credits are obviously very cheap and could have been put together by a fifteen year-old nerd. Ugh.

Plus, I generally dislike these types of films because the plot is non-existent. But to my surprise, the movie improves as it goes along. Come to think of it, it’s not that bad actually. I like the sassy girlfriend, and certainly hope she gets her own car instead of always having to ride shotgun. But then my boyfriend yawns and slings an arm about my shoulders.

I look at the empty pizza box on the table. “Yes, but we just ate.”

I’d say ‘we’ is an overstatement. Stewie devoured almost the entire pie by himself, citing his stress from work. Meanwhile, I was lucky to grab two slices before the pizza was gone.

“Yeah, but I’m hungry again,” he whines. My hackles raise. It was a long day at the diner, and I don’t need to cater to one more demanding customer.

“Well, then, maybe you should go to the kitchen and get a snack. Your dad keeps the shelves well-stocked, and I swear I saw some chocolates from Switzerland in the back the last time I was here.”