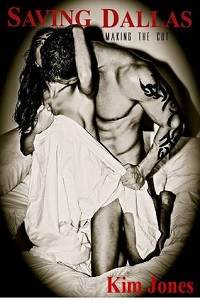 “So, this is the job? Some twenty-one year old kid who needs lookin after? I’m not a fucking babysitter, with all due respect.” This man had to be out of his mind. I had finally made it up the ladder and this was my first big job?

“This kid, as you call her, is the only chance this club has of surviving. Now the blood that was spilled five years ago is on your hands. You are the one that couldn’t keep a hold on Cutter. Now, he is out of jail and guess who has let him slip between his fingers once again.”

“It wasn’t my fucking job.” I growled at the prick sitting across from me. “Frankie was fucked up. I tried to keep him in check. I told you he was a loose cannon, and all you did was tell me to keep an eye on him. That hardly makes me responsible for the death of this girl’s parents.”

I had lost sleep too many nights over this shit. Frankie had told me he was going out for a beer. Little did I know that he was planning to knock off the guy who had sold the property out from under the club, or so he claimed. Unfortunately, his plan backfired when the only person there was Mrs. Knox. Herman was a no-show. Mrs. Knox was gunned down in her own shop, only after fucking Frankie’s face up with a Smith and Wesson pocket knife, giving him the name that would haunt him the rest of his life-Frankie the Cutter. He was immediately out bad with the club, and thank God this asshole had enough connections outside of Hattiesburg to make it disappear. Now, here I sat in front of him, once again, having the nightmare thrown back into my face.

“Look, Luke, I understand you want to straighten things out and hopefully get this club back on its feet. Everyone knows the gavel will be in your hands soon, but if this girl ends up dead the deal is off. You and your precious club go down. I have enough shit to put you boys away for years. The end of The Devil’s Renegades is very near, if you can’t keep this girl alive. If she falls and scrapes a knee, you better be there with a fucking band aid. You got it?”

I looked across the table at the man in front of me. I didn’t want to do this, but I knew it was necessary. How bad could this bitch be anyway? I would make sure Cutter didn’t get to her, and in return I would have full run of not only the club, but the whole state.

I stood up to leave, taking the envelope stuffed with hundred dollar bills, and the file provided.

“I’ll look after her. Personally.” I said smirking. This was gonna be the easiest ten grand a week that I had ever made.

“I trust you’ll handle it, Luke. Now, get out of my office before someone sees you.”

I turned my back to him and headed out. “See ya around, Mayor.”

It had been two days since the incident with Frankie the Cutter. In two days, you would think one would have enough time to deal with the emotional stress that came with being hung in a barn, brutally assaulted, and lied to by the man you love. I knew that I would not be getting over this anytime soon, but crying nonstop and secluding myself from everyone, especially Luke, was getting a little old.

I didn’t want to be here. I didn’t want to have to look at that stupid barn or see Luke’s face, full of remorse and regret. I wanted to escape, but I knew that I couldn’t.

I was not okay.

I was a wreck. The nightmares that came, the paranoia that set in, and the unknown facts about mine and Luke’s relationship were taking their toll on me. Luke hadn’t tried to tell me anymore since my latest breakdown. Just the words, “Dallas, I’m sorry.” Caused me to sob uncontrollably and want to hide under the covers. That’s as far as he had gotten.

I told Red that I needed some time alone and managed to slip out of the house before she could ask questions or give me the “I’m here for you” speech. Now, here I sit, looking out at the “Secret Garden” around me. I was pretty much shielded from the view of the house, but the barn was in plain sight. I felt cocooned, sitting on the bench with my knees pulled up to my chin. I tried to concentrate on the fountain in front of me. The cascading water splashed onto my bare feet as it bounced off the concrete bottom. No matter where I looked, the barn was in my sights-calling me; reminding me of what I had endured there only days ago.