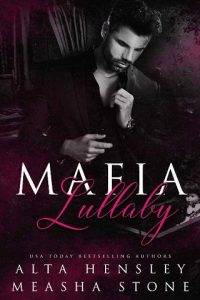 Her bank account had zero dollars when only two days ago her paycheck had been deposited. It wasn’t a mighty check, a few hundred dollars from working the register at the bakery, but it was more than zero.

“Fuck.” She ripped the receipt from the ATM and checked it one more time. The bank closed an hour ago. She’d have to wait until the morning to talk to someone about it. Obviously, someone hacked her account. She’d been robbed.

After tucking her debit card back into her purse, she headed down the street to the bus stop. She had one token left, which meant she’d be walking to work in the morning. Pulling her jacket tighter around herself, Ariana ducked into the shelter to wait for the bus. She’d missed her usual bus in order to get a few hours of overtime. Cleaning the ovens at the bakery was one of the jobs she disliked the most, but it gave her extra cash. And if she ever wanted to move out of the studio closet she was renting, she needed more income.

A chilled breeze blew into the shelter, blowing her hair wildly around her. Traffic was lighter at this time of night. The sun had already disappeared behind the tall buildings, casting the corner into shadows.

Her phone buzzed in her back pocket, so she grabbed it.

Found your letter. Sorry to see you go, but I understand.

Her boss, Randy, had sent her the message. Confused, she started to tap out a response. Maybe he was texting the wrong person. She wasn’t going anywhere. Where the hell would she go? She didn’t even have bus money.

Two men stepped inside the bus shelter with Ariana.

“Evening.” The taller of them greeted her with a sharp nod. The other, less tall but not short by any means, rolled his shoulders back and flicked his chin up toward her. The strong scent of musky cologne filled the space.

“Hi,” she mumbled and went back to sending her text.

The two men stepped closer to her. Both wore well-fitting suits with dark ties and shiny shoes. Why would they be needing the bus? Ariana took a few steps to the left, away from them.

She typed out the message again and hit send.

What the hell was going on with her phone? She paid the bill last week. Maybe it was the service. She held out her phone higher, looking at the bars light up on her screen. No, she wasn’t in a dead zone.

With a frustrated groan, she stuffed the phone back into her pocket. She’d call Randy as soon as she got home. It had to be a mistake, and easily fixed.

Ariana stepped off the curb and searched down the road for the bus. Rush hour had ended long ago; there was barely any traffic. Finding a cab would take longer, and she didn’t exactly have the cash for it.

The two men sharing the shelter with her weren’t talking. When she glanced over her shoulder at them, she found their gazes locked on her. She shook off the shiver climbing up her neck and stepped back onto the curb but moved outside the shelter. The wind wasn’t so bad, and it definitely gave her less of a chill than the guys.

The taller of the two checked his phone. “Right around the corner,” he mumbled to his friend.

Ariana turned her attention to the corner. A black town car turned onto the main street and headed for them. She took a small step back when it pulled to the curb directly in front of her.

With a glance toward the men, she took a larger step to the side, assuming their ride had arrived.

The shorter of the two stepped to the car and pulled open the back door.

“Ariana,” he said with a blank expression.

He knew her name. How could he know her name?

She shook her head, starting to turn away from the car, but the taller man was there. She stepped right into him. He gripped her shoulders hard. Her knees bent, trying to get away from the pressure of his grasp.

“In the car, Ariana. Time to go,” he said, shoving her toward the vehicle.

“What? No!” She jerked to the side, trying to get out of his grip, but he only tightened his hold.

Her knees threatened to buckle, but she had to run. She had to escape these men.

What the fuck was going on?

“She’s going to put up a fight,” the man holding the door open said. His tone suggested he looked forward to her attempt to escape.

“Good. I like it when they do.” The taller man laughed. He released her shoulders, but before she could get even a step away from him, he had her.