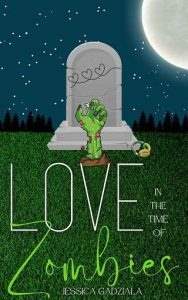 No one fell in love in the middle of a zombie apocalypse. Except, maybe, these two…
* This is a short (15k) short story with some insta-love, insta-lust, steam, and a hea.

I mean, yeah, I guess I looked like one.

Standing in the graveyard with my machete, wearing shiny metal leg, arm, stomach, and neck guards, my dark black hair pulled up in a tight high pony.

I looked like some post-apocalyptic chick from the movies.

You know… back when they still made movies.

When most of the planet wasn’t slow-walking and looking for some yummy brains to chow down on.

I wasn’t a hero, though.

I was on the hunt, sure.

But not for the greater good of mankind or anything like that.

See, the thing is, I just caught sight of my newly zombie-fied ex-boyfriend.

To say things hadn’t ended well would be an understatement. I found out that not only had he been serial cheating on me for over a year, but he’d recently taken up with my best friend and gotten her knocked up.

So, yeah, I was holding a grudge.

And I was kind of looking forward to chopping his head off, if I’m being completely honest.

I’d come a long way since the world ended.

Once upon a time, I’d been a girl who’d gagged at the sight of blood, who couldn’t stomach most primetime TV shows because they were too violent.

“Catie, why are you so damn sensitive to everything?” was the mantra of everyone around me back then.

Who’d have guessed that, just about year and a half or so later, they would all be gone, and I’d be the lone survivor of my friend and family groups.

In a lot of ways, my innate introvertedness had served me well. I hadn’t been out in public when the outbreak first started. Hell, if it weren’t for the news, I probably wouldn’t have known about it for another week or two, when my favorite snacks were in short supply and I needed to head out to re-stock.

See, at the time, I’d been working from home.

I had no close connections.

I was alone in my apartment with a stacked pantry from that last pandemic that had just cleared up a little while before the whole brain-eating one started.

At first, the news had been hopeful that things would just blow over.

Then, of course, that kind of all went away when the zombies broke in and started eating the newscasters and crew on live TV.

It turned out that our last pandemic had sort of set a lot of us up for the zombie apocalypse. We’d learned to stay in, to avoid people, and, in turn, we’d survived longer than you’d think.

But, slowly but surely, people needed to venture out for supplies. That was when a lot of the murdering happened.

There was hardly a day that went by when someone wasn’t screaming from on the ground below my little apartment building.

Did I feel bad?

I mean, yeah. Of course. But after a while, you kind of just got a little jaded to it all.

A base, primal instinct.

I spent hours and hours reinforcing the lower level of my apartment building so the zombies couldn’t get in. I lucked out having a brick building. Once the windows were properly secured and the lower part of the fire escape broken, there wasn’t any way for them to get in.

So in was where I generally stayed.

See, not only did I have my pandemic supplies, but my apartment was above an Italian restaurant.

I’d been living on pasta, waxed cheese, and rolls for a long, long time.

We couldn’t forget the red wine.

It helped me fall asleep even with the sounds of grumbling and munching of the zombies and screaming of the people who got in their way.

So I could only imagine that my ex-boyfriend, who’d been an annoying chomper when he was human, was probably especially loud as a zombie.

Not that he’d get a chance to do much eating.

What with my cutting his head off and all.

He wouldn’t be my first kill.

Judging by the tally I’d been keeping on my apartment door, I was up to twenty-four of the bloody, tattered, brainless abominations.

Most of them were from necessity.

Especially when I’d been securing my home, and had needed to venture outside.

It had been surprisingly easy.

See, I’d been worried that I didn’t have killing in me.

The thing was, the zombie virus had turned humans into something decidedly un-human. They moved strangely, sounded odd, and were actively decaying.

Hell, it wasn’t even like killing an animal—something I was sure I’d never be capable of, no matter how hungry I got.

Admittedly, I’d never been any good at those in the past. But it turned out that all the reinforcing of my house had built up some nice muscles, so when I’d swung my first weapon, I’d knocked off an arm. Then a leg. And once I grabbed something bigger, the beheading was pretty easy.