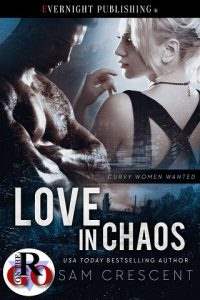 Maggie gripped the hand wrapped firmly around her throat. She hadn’t been expecting the attack, so the gun she’d found during her travels was still in her backpack. This fucking sucked because she hadn’t thought anyone was following her. When the world went to shit when she was eighteen years old, she hadn’t expected to survive for so long. Now, three years down the line, she was still traveling, still alive, and as yet, had never encountered any men. She’d seen them lurking around, and she’d always been careful.

In this new world, where there were no rules, she’d seen what some of the men had done, what they were now capable of, and she did everything in her power to avoid them. Only now, she was trapped against a wall, hands squeezing the very essence out of her.

If she screamed, it could possibly alert the biker crew she’d heard rumbling through. She hadn’t gotten her license, and any chance of driving was lost to her. Before the world went to shit, her only focus had been on her studies.

Three years, and she still wasn’t entirely sure what the fuck happened to kill billions of people. Some claimed a nuclear missile gone bad. Others believed there were toxins in the water. This one was hard for her to believe since she’d drunk the water plenty of times. She’d done so for thirst, and other times, to see if people were right. Then of course there was the virus claim. From what she remembered, no one got sick. Her parents had been driving the car, trying to get away from all the fighting when it happened. They just … died. No reason. No explanation. Dead.

The car had crashed into a tree and it took her two days to get out.

Pushing all of those thoughts aside, she tensed up as the man got closer. “He’s going to love you.” The man smiled, showing several missing teeth. “This will make him forgive me.”

His grip tightened around her neck. “You’re going to him as an offering.” He let her go, but then she cried out as his hand went to her hair. Without any more words, he started to pull her along.

She tightened her nails on his exposed arm and tore into his flesh. He let her go with a howl, the noises he made barely human. She rushed toward her backpack, but she wasn’t fast enough. He grabbed her hair and dragged her out of the room. This time, she had her bag.

The pain returned and she tried to get to her gun, but he took it from her, holding it against his side.

“Please, you don’t have to do this. My name is Maggie. What is your name?”

What the hell was she supposed to do? Trying to reason with a crazy man wasn’t helping her cause.

“Please, let me go. If you ever had a daughter, you’d let me go. You wouldn’t want to hurt me.”

The man stopped. “I had a daughter.”

“But she’s dead. So fucking dead, and has been for three years. She was one of the taken.” He growled again. More animal than human.

The sound of the party she’d been hoping to avoid grew louder, terrifying her to the core at just how close they were getting. She’d hidden during parties like this.

All night, she had heard the screams as men took unwilling women. Fear ran down her back and tears filled her eyes. She didn’t know why she’d lived and her parents died.

Three years of hunting for food.

Three years of treating all her own cuts and bruises.

Three years of living alone and only talking to herself.

And this was how she was going to end up. Within a matter of seconds, she was thrown to the ground in the center of a small bonfire party, in front of a pair of dirty boots. The mud on them was crusted dry, and it looked thick. She didn’t dare look up. Instead, keeping her gaze downward, she rubbed at the spot the man had been holding her at. One day, if she ever made it out of here alive, she was going to blow his fucking brains out.

She’d been lucky. Three years with no interaction with anyone. The gun had been more of a precaution. Now, it came down to this.

“I brought you an offering, Clay. I found her. She was sleeping.”

She was trying to, but the nightmares were being a bit of a pain in the ass. There was no sleep for her.

Gritting her teeth, she kept all the words she wanted to spew out at him to herself. Now wasn’t the time to complain, but she wanted to. Oh, boy, did she want to.