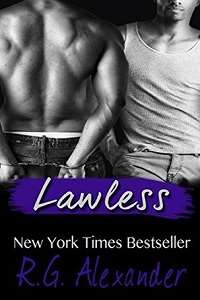 Solomon rolled out of bed at dawn. He’d been awake for hours, but the first weak rays of sunlight streaming into his upstairs window gave him a valid excuse to start his day.

He’d always found comfort in keeping to familiar routines, and his early morning jog through the quiet, older neighborhood usually helped him get his head on straight. Afterwards he had a shower, hot black coffee and scrambled egg whites to look forward to.

He’d had the same morning schedule for years. The only difference now was he didn’t put on his clean uniform and head to the station after breakfast. Some days he still had to remind himself that he had nowhere he needed to be. He hadn’t for a while.

Until he’d resigned from the only job he’d ever known, stopped cutting his hair and come out to his family near the first of the year, his life had been consistent. Structured. Now there were some days he barely recognized himself in the mirror.

He was the second Chief Solomon Finn to remove his badge and retire early. He never knew the reason his father had made his decision, but he’d left for family reasons. Personal reasons. It was an impulsive decision, but at the time he’d seen no other option.

Now his days revolved around what he wanted instead of what was expected. He’d been more available to the people he cared about. He’d also spent more time volunteering at the youth center. He’d become friends with several volunteers as the police chief, and they’d welcomed him with open arms and a schedule that gave him something to look forward to. The kids welcomed him as well, and it was a balm for his soul after this last year.

Since his savings and investments insured he had at least another year before he had to make any definitive career decisions, he had all the time he could ask for to do whatever he wanted to do.

He was untethered. Free. No obligations. No demands on his time.

At first he’d been surprised at how well he’d taken to it. He’d never had any time off before, and he couldn’t remember the last time he’d relaxed. Vacation Younger, his family had called him, when they’d gotten over their shock.

Initially his brothers assumed he’d retired because he was having a mid-life crisis. But when he hadn’t purchased a new house or car, and hadn’t celebrated his coming out by dating some guy half his age, they’d started to worry.

That was when the campaign to get him an active social life had begun in earnest. Jeremy, Rory, his Aunt Ellen, everyone knew someone they wanted him to meet for drinks. Stephen’s wife, Tasha, kept sending him articles from an advice columnist named Green.

It was thoughtful and generous. It was also the last thing he wanted.

He had no desire to go to clubs or connect to anyone online. He already knew what he wanted. Who he wanted.

The fact that the man in question wouldn’t give him the time of day was a problem no one in his family could help him resolve, and not something he was eager to share.

He picked up his pace, focusing on the sound of his shoes hitting the asphalt, the cold air that stung his cheeks and the sweat dripping down his spine. Anything to distract him from thinking about what he didn’t have, and the endless list of bad decisions that got him to where he was now.

“God, but you look grim, Solomon. I thought healthy people were supposed to be so full of sunshine they shat rainbows and radiated pure joy. You can’t even claim job stress for that constipated scowl. You’re not really selling me on the lifestyle, if I’m honest.”

Where the hell had he come from?

Solomon kept his stride steady in spite of the surprise arrival of his Irish cousin, who’d managed to catch up to him mid-jog wearing his ever present motorcycle combat boots. “William. A little early in the day for a visit. Plus, as you can see I’m kind of busy at the moment. What did you do this time?”

Someday he was going to pay Seamus Finn back for this. One trip to Ireland and he’d come back with a rich lover and three new relatives. Bellamy was a great guy, but his new cousins—this one in particular—he could live without.

Finns and vacations were not a good combination.

William smirked, an expression that seemed permanently etched into his face and begged to be knocked off every time Solomon saw it. Since he’d fought with his fists for money more often than not, he probably did it on purpose.

“I might be offended, cuz. What makes you think I did anything wrong? Maybe it’s a brisk, beautiful morning, I didn’t feel like going to sleep yet, and you’re the only one I know who gets up this early on purpose.”