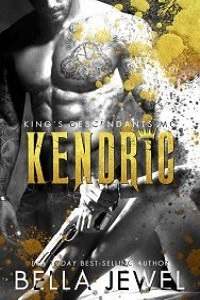 My eyes move over the dark surroundings, and fuck if I can get them to adjust. I hear voices, voices that are far too close. Far too fucking close to where I’m trying to cover our tracks.

Told them I’d make it out.

Told them I’d sort this out for us.

A low voice echoes through the trees, and I know they’re too close now for me to do anything but surrender. I left it too long. I should have run with Mykel, Samson, and Waverly, but I stayed. I fucking stayed. I did it for my club. For everyone that is relying on me. It’s me or them, and if anyone is going down, it’s not going to be them.

Dax set it all up, the perfect plan.

It’s up to me now to make sure that plan doesn’t play out.

I could run, I could hide, I could find any fucking reason not to be here.

I don’t do any of those things.

I push my shovel into the soft dirt surrounding the body of Constable Bennett, and I wait.

I wait for them to appear.

I turn, glancing in the direction that my brothers ran into and consider, for a second, that I might have time to run.

Then I think of the implications on the club.

I turn slowly and see three cops standing in the darkness, flashlights shining on me. One of those cops is Zariah, a woman I thought the club had come to trust. She could change this around for me, she could tell them I have nothing to do with this, clear everything up. But she doesn’t do that—no, she fucking steps forward, her eyes pleading with me to understand. “You’re under arrest, anything you say or do will be used against you in the court of law. You have the right to an attorney, if you can’t afford one the state will provide one.”

Her voice echoes through the night as the other cop radios in for backup.

I drop the shovel, and I meet her eyes. “Zariah,” I try to say, but she looks away, her face tight.

“Cuff him,” another cop orders.

“Where’s the rest of them?” a tall, prick of an officer demands as he steps forward and gets up in my face.

“Don’t know what you’re talkin’ about.”

“Know this is the work of your entire club, so where are the fuckin’ rest of them?”

I lean in closer, feeling Zariah’s hands tighten on my arm as she tries to hold me back. “I said,” I hiss. “I don’t fuckin’ know what you’re talking about.”

“You’re here alone, is that what you’re trying to tell me?”

“You’re standing over the body of a police officer, there are women in the basement, and we know exactly what’s going on here. We also know your club has something to do with it. I’ll ask again, where the hell are they?”

“I was workin’ with Dax, I buried this body, and I’m helpin’ him with sellin’ those girls. I have no fuckin’ idea who told you the club had something to do with this, because they didn’t.”

I’m on the ground in a split second, fists smashing into my face. The officers kick me in the ribs while the other one hits me with his fist over and over again. Blood pools in my mouth and anger bursts forth. I thrash on the ground, trying to fucking get up but nobody comes to help me.

Not even fucking her.

“You think you’re tougher than us now, boy,” the officer snarls, driving his boot into my ribs once more. “Fuckin’ pathetic biker.”

They reach down and haul me up, and my eyes meet Zariah’s. She looks horrified, but not once did she step forward and stop them. Not fucking once. She let them treat me like a fucking dog. Kicking me on the ground like I’m a piece of shit.

“You’ll fuckin’ regret that,” I roar at the cop.

“You think I’m scared of you and your little club, boy?” He laughs. “Fuckin’ bikers. Get him to the car.”

He shoves me at Zariah, and she catches me, holding onto my cuffs as she whispers, “Yes, sir.”

She turns me and we move down the path, the two of us, dead silent.

I’m sure she has plenty to say, but she’s not fucking saying it.