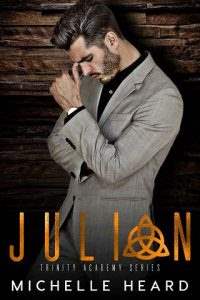 This is a stand-alone spin-off from Trinity Academy & The Enemies To Lovers Series.

Julian & Jamie’s story can be read as a stand-alone, but for your reading pleasure, it’s best to start with the aforementioned series.

Bringing the wine glass to my lips, I take a small sip. I’m not used to alcohol, but when Julian ordered a bottle and offered me a glass, I couldn’t bring myself to refuse. People tend to think that at nineteen-years-old you’re still a kid, and I’m far from one.

Being ten years younger than my sister, Della, I’ve always been treated as the kid sister by her friends, even though I practically raised my niece, Danny, by myself until she was four because Della had to work.

I’m really enjoying Julian’s company, and the last thing I want to do is scare the man away because I’m under twenty-one. I’m not a one-night-stand kind of girl, but for the man sitting across from me, I’d make an exception.

He’s tall, dark, and handsome – and then some. Julian ticks every single one of my boxes when it comes to my perfect man, who I thought only existed in my imagination.

Thick brown hair I want to pull my fingers through. Tick.

Deep brown eyes that can hypnotize me. Tick.

Strong jaw and full lips that won’t grow tired when he goes down on me. Tick.

Broad shoulders that will spread my thighs wide open. Tick.

Muscled body that will be able to go all night long. Tick.

“You have a southern accent,” Julian states. “I take it you’re not from around here?”

Shaking my head, my mouth curves up at the memory of my home town. “I’m from Saluda. It’s a one-horse-town in North Carolina.”

“What’s a girl from a small town doing all the way out here?”

Not wanting to mention my studies or too many facts about myself, I twist the truth a little. “I’m a photographer and came out here to get some scenic shots.”

Not a lie. Photography is a hobby of mine.

The interest in Julian’s eyes grows, causing my body to tingle as more heat spreads through it. It’s amazing how he can turn me on with a single look.

Wanting to keep the conversation going instead of just devouring Julian with my eyes, I ask, “Can you play any other instruments besides the piano?”

The corner of Julian’s mouth lifts slightly. “I can play the cello, violin, and guitar.”

“Wow, you’re quite the musician,” I compliment him, wondering what it’s like to pursue your passion as a career. “I’ve always wanted to learn, but I never had the time.”

“Yeah? Would you like me to teach you some piano chords?”

“Now?” My eyes widen slightly before I glance around the restaurant that seems to have emptied out while I was absorbed in Julian.

He glances around then tilts his head to the right, and with a low rumble, says, “The restaurant has closed, so we won’t be disturbed.”

The suggestive tone in his voice makes an impatient sweet ache tighten my abdomen. Loving the feeling, I get up and make my way over to the piano. Sitting down on the bench, I glance up at Julian. My mouth dries up at the sight of him rolling up his sleeves. He takes a seat next to me and then pins me with one hell of an intense look as he murmurs, “Place your hands on the keys.”

Holy cow, it’s like the man’s been made of pure ecstasy.

The entire left side of my body feels as if it’s been magnetized, and I’m breathlessly aware of every movement Julian makes. I do as he instructs and position my fingers over the keys. When Julian places his hands over mine, my fingers move involuntarily, hungry for more of his touch.

It’s needless to say that I can’t focus on any of the notes as our fingers begin to move. My attention is solely fixated on his deep breaths, his body pressing against mine, and his forearms as muscles ripple beneath his golden skin.

I become lost in the moment, and my hands still when Julian moves his right arm to behind me, turning his body so his chest presses against my shoulder.

I’m not one for public sex and never thought it would be something I’d consider, but right now, I’m more than willing to let this man take me right here on the piano.

With my breaths rushing over my lips, I slowly turn my head until our eyes meet. Julian’s left-hand caresses its way up my arm, and by the time it brushes up my neck, I’m holding my breath with anticipation.

Instead of ravaging me on the piano, he murmurs, “Would you like to take this to my suite?”

Would I? You’re still asking?