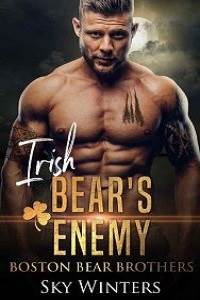 Maeve stopped running, only for a moment, trying to catch her breath. It had been a hard run, even in her bear form. She cocked her head to one side, listening for anyone that might be following, but the forest was quiet around her now. It was a far cry from the screams that had filled the air what seemed like only moments ago.

She had barely been out of the tunnel and into the woods when she’d seen the fire flying from the sky, the awful screeching of the dragons as they burned everything below them and then just as quickly flew away into the darkness without even touching down to see what they’d done.

Her heart lurched at the thought of what had happened to the men they’d torched without a second thought, and for what? They’d not even done it for their own purposes, but to win favor with a bear clan from the outside, a family that hadn’t lived here for years. What right did they have to turn back up here after all this time and attack a clan that had been here longer than any of those that opposed them?

Slowly, she made her way to the edge of the woods and slipped out, making her way to her friend’s house and shifting back into human form. She crept in the back door and grabbed some clean clothes from the laundry room, slipping into a pair of soft knit pants and a tank top before walking into the kitchen.

“Hey, honey. Where have you been?” Rebekah’s mom asked, her voice full of concern.

“I just went for a walk. I needed to clear my head.”

“I understand. I know it’s been rough the past few days for you. You must be worried sick about your fella.”

“All of them are gone. They brought in Dragons to do their dirty work for them.”

“Oh, honey. I’m so sorry,” the older woman replied, reaching out to hug her.

Maeve nodded and turned away. She should be crying, but she couldn’t. She felt something that she couldn’t quite explain inside. Rebekah appeared in the doorway and called out to her as she turned to walk away, but she ignored her. She made her way to her room to lie down, trying to push the sounds of the screams that filled her head into the abyss.

That had been several months ago. Like many of the women from her clan, she’d found a way to move on. Most of the clans here were sparse now. The Maguires had gutted them of their leadership, broken up their homes, and left them with next to nothing. Her clan no longer had an Alpha. In fact, it no longer had any men above the age of twelve. Anyone above that age had been enlisted to fight against the other clans.

Beyond the children, what remained were only the women not absorbed by the Maguire Clan as wives or mistresses. Those of a certain age had been relegated to doing laundry, cooking, and sewing as needed by Sorley, and later, Trill. Younger women had been forced into marriages, and young girls had been groomed for the same when they came of age. She had been one of the latter.

Now, she was free again, and like the other clans that were now free of the Maguires, they must rebuild. The question was how to do that with no Alphas other than children too young to lead. A meeting was called for some of the women to discuss what they could do to get their clan’s affairs in order. They weren’t technically Maguires as none of the women were of blood relation, and the children weren’t of an age to be a threat to anyone.

“Why do we need an Alpha?” Karla asked from the head of the table.

Today was the first meeting of their council—the handful of women remaining gathering together for the first time to discuss the future of their clan. Karla was the eldest and thus the one chosen to head up their discussions for now, but they would vote on a formal leader, though it might be a moot point as she didn’t see the local Alphas accepting an Omega in their fold.

“Because we are all Omegas. We’ve not been trained to lead. We lack the strength and standing,” Rebekah replied.

“Aye, but that doesn’t mean we can’t change,” Karla acknowledged.

“And what? Select an Omega as an Alpha of our clan? How does that work when we get challenged by an outside clan? Going up against an Alpha are you?” Rebekah said.

“Our Omega would not be an Alpha. She would always be an Omega and there is no reason for anyone to challenge us if we go about it right. We can join the new shifters council set up by the McNally Clan and they will provide us protection as a member,” Karla advised.