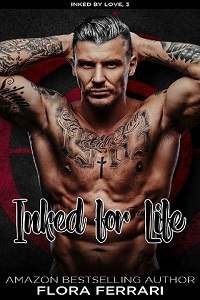 I hammer my fist into the punching bag, ducking to the side and then coming in with a left hook to the body. Or it would be to the body if this was a man. Letting out a short breath, I spin to the other side and bring my fist forward violently.

The bag whines, rocking back and forth.

A loud cutting bleep tells me the round is over, but my muscles ache for more.

I punch the bag until I can feel my knuckles pushing through the fabric of my gloves, smashing into the tough material, my heart pounding.

When I turn, I find Max standing there. He’s got an ironic smile on his face, the same one I recognize from when we were kids.

He’s around six feet, on the lean side, with his neatly combed back hair and a mischievous glint in his eyes.

“Why are you lurking?” I grab a towel, wiping myself down as I wander over. “And what’s that smile about? I don’t like it.”

My second-in-command grins. “Have you forgotten?”

I pause, thinking for a moment, then it hits me.

Max nods. “The party. We told them we’d be there. It’s supposed to be a show of alliance between….”

“I know what it’s supposed to be,” I say gruffly. “And I didn’t forget. Or if I did, it’s because I wanted to. I don’t want to associate with those Cartel bastards.”

I think about the last war seven years ago, when the Cartel tried to take this city.

They tried to buy us at first. When that didn’t work, they turned to blood and only stopped once Max and I had solidified the warring Bratva factions into one army, our army, and fought them off.

“They soaked these streets in blood,” I say, grinding my teeth. “And now we have to clap each other on the back and act like we’re friends.”

We both pause, and I know he’s thinking about the war the same way I am. Lots of Bratva and Cartel men lost their lives, but the worst was the three civilians who were killed in the crossfire…that was when the Cartel went too far. That was when I vowed to never sleep until they were out.

I won with blood, money, and deals. We won.

But it doesn’t mean I get to behave however I want. A leader has responsibilities.

“I hate this fake bullshit,” I growl as I stalk through the gym toward the locker room.

It’s after closing, and the exercise studios are dark. The building has an eerie feel to it. Maybe that’s why I like it here. It reminds me of how separated I am from regular people.

With a sigh, I nod. He’s right. But it doesn’t make it any easier to tolerate.

“Whose birthday is it, anyway?”

Max laughs darkly. “That’s a good question. I’ve got no idea. It’s not about the birthday. It’s an excuse to get the Cartel and the Bratva in the same room.”

“Security is airtight, I assume?”

“Yes. Everything’s in place, just like the other times.”

The other times he’s referring to are the other parties, family functions, and weddings. It’s all a big game of pretending we’ve forgotten the war, forgotten how Gabriel, “the Angel of Death” Escarra, targeted our city, shamelessly ordering a shooting into a crowded restaurant that led to civilian deaths.

But if I didn’t go tonight, the tense truce would crumble. Gabriel would report back to his Cartel overlords, asking for more resources, claiming it’s time for a second war.

“I knew I’d find you here,” Max says when I emerge from the locker room, freshly showered and in a clean suit. “Buying this place was the best choice we ever made, eh? We get ten times more use out of it than our other properties.”

I can’t help but smile. Or it’s close to a smile, at least…far nearer than I’d get with anybody except for Max.

“Do you remember when we broke the window?”

Max chuckles as we walk through the gym. “What were we, eleven?”

“Around that. We wanted to work out so bad. The manager back then was Karl, remember? He was a good man.”

“He put us to work to repair that window. I remember.”

We walk across the parking lot. Max’s driver opens the door for me, gesturing inside.

Max glances sharply at me. “Alone, without security?”

“I don’t need security,” I snarl, climbing into the car.

Max huffs as he slides into the car next to me. “You do need security, Damien, for the record. It would take one Cartel foot soldier who wants to make a name for himself, then you’re screwed.”

Max looks out the window at the city passing us by.