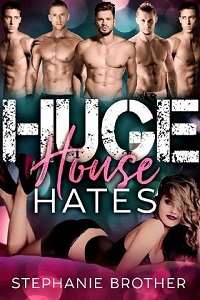 “You can move in with my sons,” he says, as though it’s the most obvious suggestion. I guess I should be grateful that Randolph Carlton even cares what happens to me when he whisks my mom to Antigua to live a better life. I would be if he wasn’t responsible for destroying my family ten years ago. It’s the kind of thing that’s hard to put aside.

“That’s a great idea, Cora,” Mom says with false brightness. She’s trying to pretend that she hasn’t already discussed this with Randolph, but I know better. There’s no way Mom would leave me behind to fend for myself. She needs me to be okay before she can run off into the sunset with her disgustingly rich, cunning, treacherous silver fox and put the past behind her.

I’m not a jealous person, and I’m certainly not the kind of daughter who’d wish for my mom to stay single. She’s had it tough and deserves her time to shine.

He is literally the only man, apart from my father, who I hate. If going from a man like my father to a man like Randolph isn’t jumping from the frying pan into the fire, I don’t know what is.

And this huge change to my life is coming at a terrible time. My college friends have all shacked up with their boyfriends, some with more than one guy in reverse harems bigger than anyone should sensibly contemplate. My decision to take an art degree and use it to start a pottery business hasn’t exactly left me in a financially secure position. There’s no way I can afford to rent my own place, and I guess Mom must have told her husband-to-be what a financial failure I am.

“I can’t do that,” I say weakly. “I’m sure your sons don’t want a strange woman to move into their home!” What man would, for heaven’s sake? A female housemate is a recipe for disaster. They won’t be able to roam the house naked anymore or leave their dishes all over the place. A man-cave just isn’t a place for a woman, especially a woman who doesn’t want to be there.

“They’ll love it,” Randolph says. “They always wanted a sister, but it wasn’t to be.” Sister? Oh Lord. We’re all adults, and I’m certainly not in a position to want to accumulate siblings. “Honestly,” he continues, “it’ll be no problem. I’ll let them know you’ll be moving into the master suite, and they’ll get everything ready for you. Treat it as your home, please. You’ll make me feel better about stealing your mom away.”

The word “stealing” slips out of his mouth like the slide of silk sheets over naked limbs, and it should, because stealing comes easily to Randolph. Maybe he thinks I don’t know what he did to Dad’s business. Maybe he’d deny that there was anything wrong with aggressively thieving market share and using underhanded means until your competitor’s company has dried up like grass in the summer sunshine. Maybe he’d deny being to blame for my parents’ divorce after everything fell apart.

Randolph is the kind of man who conceals the dirt on his hands with clean white gloves. I’m talking metaphorically, of course. In reality, his hands are perfectly manicured and unnervingly soft.

I shake my head, but my resistance isn’t genuine because I’ve weighed up my options. Homelessness vs. living with Randolph’s spawn is a terrible choice, but I’d rather have a bed and access to running water than not. Randolph’s sons might be the children of Satan, but at least their father will expect them to play nice, unlike the random predators I could encounter on the street.

Even though Randolph presents me with a neat solution to my problem, I don’t feel any less panicked than when Mom first showed me the giant blue rock on her ring finger.

As always, I curse the men who’ve ruined my life. Randolph for being an unscrupulous thief, and my father for weakly seeking solace in the arms of another woman. I have a vision in my head of what my life would look like if those two things hadn’t happened. Mom and Dad would still be happy. We wouldn’t have lost the house. I wouldn’t be saddled with a mountain of student debt and a chip on my shoulder the size of the Empire State Building. In my mind’s eye, I see myself with a broad smile and sparkling eyes, rather than curled lips and a scowl. It’s like that film, Sliding Doors, where a whole other reality exists because one moment didn’t happen.

I know it’s pointless to imagine. Life isn’t like a movie. There’s no rewinding time, and I just need to get on with it. If I believed in fate, I’d say it dealt me a shitty hand, but I don’t. I believe that people make choices that reflect their true selves. Randolph is a shark who has successfully gobbled up my mother and a lot of my potential in the process. My dad is a grass snake who slithered away at the first sign of trouble and has spent most of his life hiding in the undergrowth. My mom is a magpie, a lover of shiny things and shiny people. Sometimes I catch her looking at me with a furrow between her brows as though she’s wondering how I got so tarnished, but she never asks me why I don’t smile much when we’re together. She just breezes along with enough happiness and joie de vivre for the both of us.