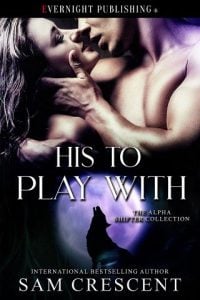 Anger rushed through Holly Meek as she stared across the large dining hall at the heartless bastard.

“You can’t possibly be serious,” she said.

“I don’t want your pack’s stink around me. I don’t trust wolves that travel in packs.”

She scoffed. “I told you why we had to move. The hunters closed in. We lost good men and women.” It was a miracle they’d been able to get the children out in time. Human hunters were rare, but one of their pack had betrayed them. For drugs, he’d given them all the information the hunters needed to attack them.

Her father hadn’t been prepared.

The bloodbath would stay with her forever.

It had taken them weeks to stumble into this small town. Not many locals and they’d stuck to the forest, biding their time to slowly join the community, but this man, Damon Barasic, had denied them. His scent covered the entire town, forest, and surrounding areas. There was no other sign of any other wolf. Just him.

Her father had approached and was denied residence.

Now Holly stood in his large house, more like a mansion, trying to reason with him. They were all tired. Exhaustion meant bad news in wolf form. If they were too tired during their turn, the wolf took over completely and they were at the mercy of their beast until they went back to sleep.

“Do I look like I care?” He speared a piece of steak and shoved it in his mouth, his gaze on her the entire time.

“Fine.” She held her hands up in surrender. “I’m sorry for wasting your time. We’ll be gone tomorrow morning.”

The children were not in a fit state to move. Holly didn’t know what she was going to do to get them moving.

She ran fingers through her hair, turning on her heel to leave, already making plans.

“You’re not going to offer me anything?” Damon asked.

Holly stopped and looked toward him. “Excuse me?”

“You’re the alpha’s daughter, am I correct?”

“And you don’t think you could offer me … a peace offering? Or convince me to let you and your rodents stay?”

“We’re not rodents.” Anger rushed down her spine. The need to defend her pack was strong, but she also knew she had no way of winning if she started a fight with this man. She was strong, but not up to his strength. The scent of him cried alpha. It came off him in waves, almost all-consuming the scent was so strong. “What do you want? Money?”

“Someone to clean your lands?”

This was getting more confusing by the second. “If you don’t need someone to clean your lands or your house, what do you want?”

“I want someone to play with.”

This made her frown. “Excuse me?” He was a grown man, she doubted very much he meant playdates.

Damon sat back. His gaze went down the full length of her body before traveling back up.

She knew as a wolf, her body was rare. Most of the female wolves were slender. Holly had been a bigger woman, curvy all her life. As a young child, she’d been bigger, then as a teenager, she’d gained even more weight. After her transformation, she’d kept all her curves and was one of the biggest women within the pack. Her mother was also a curvy woman and Holly’s father completely doted on her. Their love was something Holly hoped to find for herself.

She’d yet to find a mate.

No one within the pack had staked a claim and there was certainly no compelling feeling to mate with anyone.

“I want someone to fuck.”

“Was that blunt enough for you?”

She looked past his shoulder. “Do you want to have your pick of the females within the pack?” There was no way she’d ask anyone to bed this man for their safety. It was out of the question.

“You heard me. I want you. No one else.” He smiled. “Holly, become my fuck toy, my plaything, and you and your pack of rodents can stay here permanently.”

She glared at him. “Don’t call them rodents.”

She couldn’t believe she was hearing this. It was crazy. He wanted her to become his … fuck toy, and in return, her family and pack were safe.

“What does this mean? Do I have to come to you every single time you call?” she asked.

“And when you’re bored with me?”

“Depending on how well you serve me, you and your family can stay and live out your lives on my lands.”