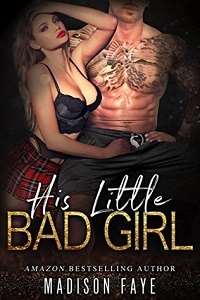 Prone to acts of disobedience.

My jaw tenses as I glance over the student file in front of me. Suspended twice senior year — once for ditching school and smashing the shit out of a professor’s car, and the other for being caught drinking during fifth period.

I wasn’t expecting to take over as Headmaster of Thornbull Academy until this fall, but here I am barely two months into the job — a full summer earlier than expected, I might add — and I’m going to have to deal with this shit. Wonderful.

Academia is hardly the career path most guys who get out of Marine Corps in one piece choose, but for me, it was a calling. After all, my dad may have been a military man, and that's the path I took young, but it was my mom who was the reader and the studious one. She taught preschool. Maybe it was a combo of both of them that’s led me from squad sergeant in Afghanistan, kicking down insurgent doors and dodging bullets, to be the firm hand of control and discipline at one of the richest, most academically focused private schools in the country. The studiousness from my mother, the discipline from my dad. The courage and firmness to carry through from the USMC.

But like I said, I wasn’t supposed to start until fall. That was before ancient Doctor Lindon, my predecessor, passed away two months before the end of the school year and his retirement day. Not a bad way to go — quietly in your sleep next to your wife — I’ll grant him that after some of the shit I’ve seen in the Middle East. But still, it sort of put a damper on my plans to settle into West Haven and enjoy a summer living amongst the phenomenally wealthy and connected residents of this affluent seaside town.

On top of that, Thornbull Academy is so academically prestigious, and it’s students so insanely driven, that it offers a post-senior-year, pre-college “summer semester.” For some schools, summer school is a last chance for the fuck-ups — a hail Mary for the slackers to get their shit together and graduate.

Not at Thornbull, let me tell you. At this place, it’s a way to add even more pages to a resume before you start in at Yale, or Harvard, or Cornell, or wherever. It’s a way for go-getter students to pack in as many college-level freshman credit classes as they can, so all these little valedictorians and salutatorians can hit the ground running at Ivy League schools. I mean hell, apparently last year, three guys used their summer program to build a stock-trading algorithm, and before they started college in the fall, they cashed out for a cool billion dollars.

Fuck, right? These kids are eighteen, rich, connected, and have their whole lives taken care. I mean they should be out chasing tail and drinking beers on the beach, not cramming more shit into their trust fund brains.

Not exactly the best mindset maybe for the new Headmaster, but fuck it, those are my thoughts on the matter.

I tap the desk in front of me before stretching my arms up and straining my muscles, feeling them pull against the still not-quite-familiar feel of a dress shirt and tie.

Whatever my feelings on this summer school thing though, it's my new duty to oversee it and all the students attending, all while prepping for a very big jump into the deep end come fall. Let’s just say Dr. Lindon left some big damn shoes to fill, and as progressively liberal and forward thinking as this town likes to think it is, I’ve seen the way most people around here look at my physique, or my combat record, and hell, at the tattoos that even a full suit won’t hide, and wonder just how the fuck I got a job as Headmaster.

And I’ll tell you how: because I’m a goddamn smart motherfucker.

That’s not just a boastful brag either. Stanford undergrad, top of my class and an MBA from Wharton that I worked my ass off for in-between tours. Yeah, papa may have raised a good little soldier, but mama didn’t raise no fool, that’s for damn sure.

But, this fool has a long damn summer ahead of him. Because on top of everything else, there’s this — the file on my desk.

Most of the kids in this summer program are goody-two-shoes, straight-as-an-arrow go-getters. This one is here because not taking the two classes necessary means no graduation. And seriously, this file is bad. Back-talking. Swearing at teachers. Drinking in an empty lecture hall at twelve in the afternoon. As a recently “graduated” senior, this student should be out of my hair already. Except, here we are.

I glance through the reports, and the police write-ups for the vandalism to Professor Hershman’s car last year. I mean Jesus fucking Christ, breaking the windshield was one thing, but pissing on the steering wheel afterwards?