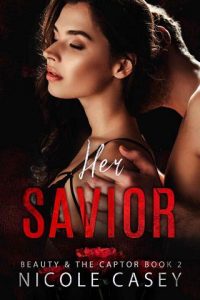 The stone walls had been closing in all around me, a little more each day. The room was so god damned small. And now the metallic scent of blood hung heavy in the stale and musky air. It was so thick, I could almost taste it.

I’d never killed anyone before. I’d never even held a gun before, but now he’d left me no choice. He wasn’t going to take anything else from me. No more!

I stood on shaky legs and my finger was poised against the trigger. I’d locked my elbows to keep my arms from trembling as much as my legs were. I was ready. As ready as a person could be for a moment they’d never imagined would come to pass.

“I loved you,” I said, and despite the hoarseness of my voice, it was stronger than it had been in days.

“After the horrible way you treated me, the hell you put me through, I still loved you,” I continued.

I wanted him to know that this was for all of it. That while he’d forced me into this corner, he was going to die for every one of his sins.

And then it was time. I’d wasted enough seconds.

“I love you,” I whispered as I pulled the trigger.

It was true. It was pathetic, but it was also true. Despite what he’d done to me, I still loved him. I suspected part of me, somewhere down deep inside, always would.

The look of surprise that marred his handsome features remained etched on his face as he fell to the ground. And as if I’d taken the bullet, too, I dropped, landing hard on my knees. It should have hurt, but I didn’t feel it.

I curled over and gripped my arms tight around myself as if that could somehow hold me together. Oh god, it couldn’t. It wasn’t enough. I was unraveling at the seams. Coming undone, and flying apart.

It would never be enough.

I’d been watching Derek’s face for the past four and a half hours. It was a strange thing, terribly intimate to watch a person sleep.

His features were smooth, relaxed as if the worries that plagued him had given him a brief reprieve. Every once in a while, his brow had furrowed and I wondered what was going on his mind. Had the stresses of our escape tried to seep back in and tarnish the few hours of rest he’d allotted himself?

I felt the fierce need to chase them off, though I could do nothing more than lie here and make evil faces at the invisible demons that disturbed his sleep. Derek needed this rest. Desperately. Aside from the occasional hour-long nap he’d given into, pulled off in the brush by the side of the road, he’d been awake for three days straight. His weariness had been evident in the rings that underscored his eyes, but he’d refused to relent. He’d driven through one city and town after another as if the hounds of hell were nipping at our heels.

I had to believe they weren’t. That we were safe. He’d killed the man who had posed the biggest threat and we were miles away before anyone could possibly have noticed we were missing. He was taking no chances though, and it was only after I’d worked up the nerve to start nagging him incessantly that he’d finally agreed to a brief stop at the motel we now occupied.

His brow furrowed again, and I reached out to smooth the lines as if I could infuse peace through my fingertips. But my fingers hovered a hair’s breadth away—just like each time before. It was ridiculous, of course, but I was having difficulty finding my place in this thing that we’d become.

It had all seemed so simple when he’d been inside me and I’d realized the depth of my feelings for him, but leaving behind the weeks spent in my prison had proven difficult. I had no idea what Derek expected from me now, and admittedly, I was more than a little afraid to ask.

I’d been so certain then—certain that he felt the same intense feelings for me—but with every mile, my doubts and uncertainties grew. Could I touch him? Without permission? Or did he still expect the obedient girl in her prison who did what she was told and didn’t make decisions for herself? I wanted to be more to him than a mindless slave, but if I pushed too hard, would he drop me off on the side of the road and drive away?

I couldn’t deny that it wasn’t only Derek I was having a difficult time figuring out. An equally difficult question—what was it I wanted? I liked the confidence, the dominant authority that seemed to seep from his veins. It made my heart beat harder and ignited a fire between my thighs. Did that mean I wanted him to treat me like a slave? That didn’t sit quite right, but nothing did.