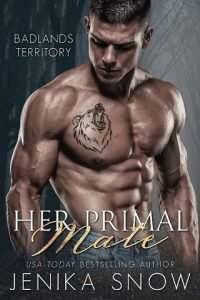 I knew it was coming, even though I’d never experienced it before.

It was this heat encompassing me, this tightness in my muscles. It was this sensitivity in my breasts, this achiness… down there.

For days, I’d felt it, that incessant need, bringing, fire burning through my veins increasing by the second. And here I was now, three days later and my mating heat full-blown and consuming every part of me.

I was fertile yet didn’t have a mate. There would only ever be one true male for me, one single person who was born to be mine and me to be his. I’d only be able to carry his child. I’d only ever be aroused by him. It was only him and me… yet I didn’t even know who he was, where he was, or if our paths would ever cross.

My mating heat. The once-a-year occurrence that happened to a select breed of female shifters sometime after our eighteenth birthday. And I was one of the lucky shifter breeds that had to deal with this.

And here I was, a twenty-one-year-old Iberian lynx shifter who just moved to the rural, mountain town of Badlands Territory and happened to start her mating heat on the first night of her new job.

And because I wasn’t mated, had no mark on my body from my mate nor his scent covering me and letting every male know I was taken, I’d be sniffed at like a fresh piece of meat at the local market. They’d think I was fair game, because, well, they were male and they’d see me as primed and fertile. It would call to all their basic urges.

I contemplated calling off work, but seeing as this was my first night at my waitressing job at Ginny’s Bar, I didn’t think it would make me look very good.

I stared at my reflection and took note of the physical changes this damn mating heat had caused in me.

And we wouldn’t even talk about down there. My pussy was so wet… constantly since the heat started, that I’d given up on even changing my panties. What was the point when they’d just be soaked in a couple hours’ time.

Although I wouldn’t say I was aroused-roused, as in I needed just any male to tame this heat, it was very clear my body was ready for my mate… even if it didn’t get the memo I didn’t have one.

I rested my hands on the edge of the sink and closed my eyes, breathing out slowly. I’d recently moved to Badlands Territory, a small mountain community that mainly had shifter residents. I decided I was done with where my life was going. Nowhere. So I packed up my shit, told my parents I was taking a road trip to “find myself,” and headed out on the open road. I only had a few bags of clothes, my savings that wouldn’t last me very long, but I’d never felt freer than I did when I headed onto the open road.

And when I’d come into Badlands, thinking I’d just pass through and keep moving, I felt this pull, this strong need to stay. I spent the night at the local motel, sightseeing through the town, which didn’t offer anything exciting, but still, it felt wrong to leave.

And so I said what the hell. I’d stay, if not for a short time. I got the waitressing job, found this one-bedroom house that was in desperate need of an upgrade to this century, but overall, I’d never felt like I should be somewhere more than I did here.

And my fucking mating heat decided now was the best time to rear its head and make its presence known.

I kept breathing out slowly. It helped to center me, to push the heat down a little bit. I didn't know how long it would last, but I heard a mating heat, especially the first one, could last up to two weeks. God, I hoped I was lucky and this shit was done by the end of the week at the latest, but knowing my luck, I’d have it the entire fourteen days.

It wouldn't be an issue if I had a man, a male to help ease me, to fill me up in literally every way.

That thought, those images of my faceless mate, moved through my head and I groaned. I’d never been with a male, never wanted to. I had no desire, no sexual cravings for anyone but him. And I didn't know who he was. My fated mate. If I never met him, if we never found each other, I’d forever be this virginal Iberian lynx shifter, always craving him but unable to sate myself, not even if I found pleasure and relief with my own hands.