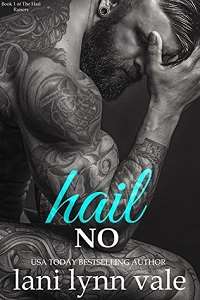 My level of sarcasm has gotten to the point where even I don’t know whether I’m kidding or not.

I stood up, hating the way my knees creaked and popped.

I’d been in the military for seven years, then had worked for Hail for five more. It took spending four years in the pen, though, for me to start feeling fucking old.

I guess getting jumped in the dark would do that to a person.

I gritted my teeth, but kept my pace deliberately slow.

“I don’t need your bad attitude. I have your file in my office and I’ve spent the morning going over it. There won’t be any ‘accidents’ while you’re under my supervision, got it?”

The accidents he was referring to weren’t accidents. I’d never said they were accidents.

In fact, I made sure to tell the guards exactly what had happened each time I’d had to use my hands to defend myself.

I was just lucky that the guards liked me and lied when they went to write their reports.

“Yes, Sir,” I found myself choking out.

I wanted to call this man ‘Sir’ about as much as I wanted to take a shit in a plastic bag and carry it around in my pocket.

Thirty minutes later, I was leaving his office with a slew of rules that I now had to follow, as well as some regulations I wasn’t aware that would be required of me when I’d started the day.

Needless to say, as I made my way home—walking, might I add—I wasn’t in a good mood.

Not at fucking all.

I ripped the sheet off of the couch, and coughed when a cloud of dust filled the still, stagnant air around me.

“Fuck,” I gasped, waving my hand in front of my face to clear the air.

It didn’t work, but at least I’d given it the good old college try.

No one had been in here since I’d gone to prison. Not my friends. Not my dad—not that he even knew I’d gone to prison since I hadn’t seen him in years, and that was before I’d done time. Not even my sister had bothered to come in here and clean up. Though, that didn’t surprise me much. Every single one of my family members were selfish. I doubted cleaning my place up for me had even crossed their mind.

Yet, had they been there, it wouldn’t have mattered. When I walked onto my property less than twenty minutes ago, I’d found not just overgrown weeds, but also trash. Junk. Old fucking tires.

It was as if my entire front yard was being used as the city dump while I was gone, and not one single person had done a damn thing to stop it.

Angry all over again, the next five minutes entailed me ripping sheets off of furniture and opening the windows in order to let the stale air out and the crisp, early October air in.

I threw the last of the sheets that were covering my furniture outside the door, and left the screen door propped open, allowing much needed air to permeate the room behind me.

“You need any help?”

I looked up to find Travis, the co-owner of Hail Auto Recovery, standing at my doorstep.

I’d expected my sister to pick me up, but she never showed.

Not that that really surprised me, either.

My sister, yet again, was a selfish person. If it didn’t benefit her in some way, she wouldn’t do it.

I looked over at him.

“I called Dante. Didn’t answer,” I informed him. “I took that as the universal sign to fuck off.”

He laughed humorlessly under his breath. “There’s a lot of shit going down with Dante,” he admitted. “And I’ll tell you about it when there’s a lot of whiskey to share. Until then, I brought you the keys to the truck.”

My brows went up.

“Isn’t it company policy not to hire men who’ve had a record?”

He looked at me like he wanted to smack me.

“We both know you were dealt a bad hand,” he said, tossing me a set of keys. “If you need any help, don’t hesitate to ask. Use the truck. Don’t use the truck. I don’t fuckin’ care. Just make sure you log personal and business miles so we can keep a record of them, okay?”

I nodded mutely, suddenly finding it hard to breathe.

They trusted me. They believed in me.

You find out who your friends are.

I hesitated, and he filled in the blanks.

“Do I know what happened to the horses?”