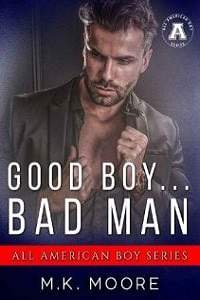 Growing up in Texas, I was raised to be a little gentleman. I volunteer at church; I help old ladies cross the street or help with their groceries. I do what needs to be done. I’m known as that good boy Adam Cambell. While I don’t mind helping people, being a good boy isn’t all it's cracked up to be. I’m starting to wonder if I’ll ever be anything more. Since my dad died last year, I’ve been wondering how I’ll ever take care of my family. Dad’s death wasn’t sudden. We knew for two years it was coming. Cancer sucks. He made me promise to take care of my mom and my sister, and I take my vows seriously. Good guys finish last, or so they say. That doesn’t work for me, but that’s a problem for another day.

It’s my twin sister Leah’s, turn to choose the movie we see today. For as long as I can remember, Saturday matinees have been our thing. She’s my best friend, and with the exception of baseball for me and dance class for her, we do everything together. This is the first time Mom has let us go in alone. She’s off doing some school shopping in the mall, but the theatre is attached to the mall. It’s our first taste of freedom, and neither one of us wants to do anything to mess that up.

Leah chose Lyanna’s Garden for us to watch, and I’m not happy about it. I have no idea what it’s about, but I wanted to see the ninja movie that’s playing, but since we alternate, I can’t say anything about it. Besides, I’m sure I’ve made her watch movies she didn’t want to watch. We sit down in the theatre. Tenth row, center seats. It’s the best location; trust me, we’ve scoped it out. We’re experts on the Galaxy Cinema 6. We know the best seats in the house, no matter which theatre we’re in.

As is our tradition, we get a large popcorn to share, two small cokes, and a candy of our choice each before going to our seats. We answer the dumb trivia questions, watch the previews, and then the lights go down, and the movie starts. Normally, this is the part I love, but I am dreading this movie. I’m going to hate this, I just know it, but as the movie opens on a little blonde girl skipping through a tropical garden, I sit up straighter. I’ve never seen this girl before, and she’s the prettiest girl I’ve ever seen. Even at eleven, I know something is happening to me, but I don’t know exactly what. It takes me two seconds longer to get it. That’s new.

“Who’s that?” I whisper after leaning over to Leah. I need to know, and Leah knows everything about movies and actors. She calls it her useless knowledge superpower.

“Evie Dexter,” she whispers back, never once looking away from the screen.

“Why does that sound familiar?” I ask, trying to remember how I know that name.

“She and her sister are pretty famous. Their parents are too. She was in that show, Granny Knows Best.” We used to watch that show every Friday night when it was on. Now that it’s in repeats, we still catch it once in a while. It was about a little girl who went to live with her grandmother when her parents died in a plane crash.

“Hmm,” I say and settle back in the seat to watch the movie. When it’s over, I realize two things: one, the movie was terrible, but she was amazing. I was mesmerized by her, and two, I’m going to marry Evie Dexter one day.

No matter what it takes, I will marry that girl one day.

“Action!” Stefon, the director, shouts, and the scene starts. Again. I have been standing in this corner since six-thirty this morning. It’s now noon. I don’t have any lines in this scene; I’m just supposed to look bored. That, I can handle. I have been acting since I was four months old, and I’m exhausted. Don’t get me wrong; I know that I’m blessed, and I love acting, but I need a break. In three or four years, I can take one. I just have to get through the filming of my next six movies, and I’m free for however long it takes to lure me out of hiding. I’m tired of teenage dramas. I’d love to do an epic fantasy or a rom-com or, better yet, a sweeping love story for the ages.

My whole family acts. It all started with my great-grandparents. Stephen and Aida. They were stars of the silent film era. My grandparents, parents, aunts, uncles, and cousins. Every Dexter is somehow in the industry. A real Hollywood Dynasty. A real Hollywood Tragedy. If only people knew what it was really like. It’s not all glamorous parties, drinking, and glitz. The lies, secrets, and betrayal run rampant, and we do ninety percent of it to ourselves, but I know that I’ll never do anything else. It’s in my blood, it’s my passion, it’s a choice I make every single day, but I hate the roles my mother lets me audition for, not that I even audition much anymore. I can’t wait to be eighteen, and I can take whatever role I want to.