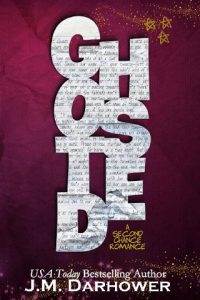 Rain fell from the overcast sky in sporadic bursts, quick manic showers followed by moments of nothingness. The weatherman on channel six had predicted a calm day, but the woman knew better. A tumultuous storm was rolling in. There was no way to avoid it.

Her heart beat frantically, blood surging through her veins, mixing with enough adrenaline to make her stomach churn. She might’ve been worried about getting sick if there had been anything left inside of her to give, but no… she was empty. Burying her mother had taken everything out of her. This, on top of that, was too much for her to bear.

Kennedy Garfield stood on the front porch of the two-story white house, staring out into the yard as thunder clapped in the distance. Lightning illuminated the darkened afternoon sky, giving her a better view of him. Her uninvited visitor stood a mere ten feet away, dressed in a designer suit that cost more than she made in a year, but yet he still somehow managed to look thrown away. His black tie hung loosely around his neck, his button down soaked and clinging to his ashen skin.

“Why are you here?” she asked, unable to handle his silence or his presence. As quickly as this storm rolled in, she needed it to go back away.

“You know why I’m here,” he said quietly, his voice shaking. Even from a distance, she could tell he’d been drinking, his eyes bloodshot and glassy.

He said nothing for a long moment, running his fingers through his thick dark blond hair, the ends curling from being wet. He was drenched, although the rain had since slowed to a steady trickle. She wondered how long he’d been standing outside before she noticed him. Before she sensed him.

She imagined it had been quite awhile with the condition he was in.

The yellow cab parked along the curb blew its horn, the middle-aged driver growing impatient. Kennedy nearly laughed at the sight of it. She figured taking a cab would’ve been beneath him those days. Limos and town cars, with chauffeurs and security, were more his level.

Or so she’d heard, anyway.

He glanced back at it, his face flickering with a hidden aggression, before he turned to face her again. His expression softened when their eyes met.

It was the sound of her heart being torn apart once again.

“You shouldn’t have come,” she said. An assault of tears burned her eyes, but she refused to shed a single one. Not while he was there. Not while he was looking at her. So many years later and he still got under her skin. “You know that. You’re just making this all so much harder.”

“I know, but…” He paused, his blue eyes imploring. “I was hoping I could… I mean, I wondered if it would be okay if…”

“No,” she said, knowing right away what he was asking, but there was no way it would happen—not then, and certainly not with the condition he was in. He knew better than to even ask.

He sighed as the driver laid on the horn for the second time. Eyeing her warily, he took a step back, and then another, before turning to leave without saying ‘goodbye’.

They’d already said enough goodbyes to last them a lifetime.

Kennedy stiffened as footsteps stomped through the house behind her, on a mission as they hurried her direction. The front door flung open, a tiny human tornado appearing at her side, wearing a fluffy black dress with her brunette hair in pigtails. Despite all the darkness surrounding the little girl, she was all bows and sunshine, innocence and happiness, and Kennedy would do everything in her power to keep her that way. She didn’t need to know more devastation. She was too young to endure that kind of pain.

Too young to have her heart broken by Jonathan Cunningham.

“Who was that, Mommy?” the little girl asked, watching the cab as it disappeared into the storm. “Did they come for Grandpa? Were they Nana’s friend?”

“It was no one you need to worry about, sweetheart,” Kennedy said, gazing down at a pair of twinkling blue eyes—something her sweet little girl had inherited from him. “The man was just a little lost, but I sent him back on his way.”

The beeping of the checkout scanner is monotonous, a dull drone I barely hear anymore, as it melds with Wilson Philips’s Hold On playing on the loudspeaker radio. The same songs, day in and day out. Same constant beeping. Same everything.

Same customers in and out of the store, buying the same things they’ve bought before.