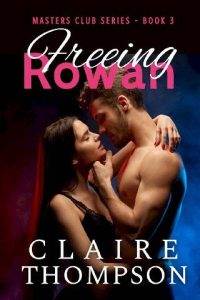 “Rowan, why don’t you stand on the floor beam facing Cleo?”

The trainer, Eric Franklin, didn’t need to phrase it as a question, but she’d been skittish since her arrival early that morning, and he wanted to put her more at ease.

He wondered if he should have waited before leaping straight into an intensive training scene. After all, this wasn’t generally the way he liked to operate. In his private submissive training practice, when he was hired to work directly with a submissive, he always met first, face-to-face, with the Dom. He also liked to meet with the couple together, to get a better sense of their interpersonal dynamic and training goals.

As a contract trainer for the Masters Club, however, he didn’t always get to set the parameters, and Rowan was a definite case in point. Because of some exception he didn’t yet fully understand, she’d been dropped off for training early that morning.

Though, to be fair, he’d had an opportunity to speak directly with the girl just after she’d arrived early that morning. And, while she’d seemed a little nervous, that was to be expected.

He’d contented himself with that brief interview, along with perusing the Dom’s detailed questionnaire that included their D/s background and goals. Even so, he’d basically been thrown in the deep end with this new trainee. He would need to tread carefully.

Cleo, a Masters Club house slave, had recently been won in a play auction by a visiting member, Jack Hartford. As Eric often tapped Cleo for assistance during training at the Masters Club facility, Jack had graciously agreed to participate in a shared scene that Eric hoped would meet some of the stated goals of Rowan’s Master.

At a nod from Jack, Cleo took her place on the beam opposite Rowan.

Eric retrieved two vibrators with clit stimulators from the training room supply cabinet. He removed the protective wrappings and handed one to Jack.

“This session will be about working together to achieve your goals,” he explained to the women. “Your goal is to keep the vibrators in place while obeying various commands. Be sure to ask permission if you think you’re about to climax. I may or may not let you, so make no assumptions.”

Working in tandem, the two men attached one side of each pair of clamps to Cleo’s nipples, the other side to Rowan’s, so that when one girl moved, the other would feel the tug. Rowan winced as the clamps compressed her nipples.

“Breathe,” Eric murmured, placing a supportive hand on her shoulder.

When he was satisfied she was ready, he clicked on both remotes and handed one to Jack.

Rowan gave a small yelp as the toy whirred to life, her eyes widening. Cleo, well-trained slave that she was, betrayed no reaction.

“Remember,” Eric said, his focus on Rowan, “don’t climax unless or until I give you express permission.” He moved closer, watching his new trainee carefully. “Take a small step away from each other.”

Each woman edged back on the wide beam until the chains between them were parallel to the floor, but not overly taut.

Cleo obeyed immediately, but Rowan remained rooted to the spot.

“Rowan,” Eric said gently, “You need to take a step back as well. Maybe this will help.” He turned up Rowan’s remote, the whirring sound between her legs growing louder.

“Oh,” Rowan breathed, a deep shudder moving through her slender frame. But, after a moment’s hesitation, she did as directed. Her face twisted in pain as the clamps tightened at her nipples. She was trembling. At first, he just assumed it was a result of her efforts to balance the various types of stimulation to which she was being subjected. But something in her face gave him pause. She didn’t just look nervous, she looked frightened.

He sensed something fragile in Rowan, something that might break if pushed too hard. Yet, if he stopped the scene now, it would only reinforce her fears. He needed to give her a chance to find her stride.

It was hard not to compare Cleo’s poise and grace with Rowan’s jerky, tense movements. It wasn’t an especially challenging scenario, certainly not for a trained slave, which Rowan was purported to be. Yet, as Eric directed them back and forth along the beam, Rowan’s agitation only seemed to intensify.