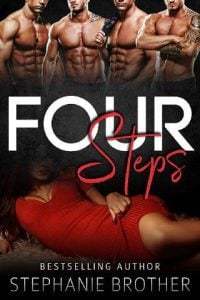 I don’t have brothers

I should be, but I can’t manage to summon the emotion.

One parent long gone and the other now dead. I’m alone in this world, but I’ve felt alone for years.

The weather is colder than usual for the end of November, and despite glimpses of the sun, my cheeks are turning nearly as numb as my heart. The only thing I’m really feeling is sympathy for my stepmom Rachel. She’s a sobbing mess, leaning heavily on her sister, Michelle. Rachel probably can’t imagine life without my dad, but if she could, she’d realize she’ll be better off without him.

I get the idea that the small group of people gathered here for the service expect me to be standing next to Rachel, right beside my dad’s grave, but I’m further back in the small crowd. I didn’t want to attend, but my coworkers at Rusty’s convinced me I should, and here they are on each side of me, staying close as if I’m going to fall apart like Rachel. There’s no chance of that happening, but I appreciate that Christine and Becca are here, providing a buffer between me and the curious eyes of Dad and Rachel’s acquaintances.

After some religious readings, the pastor has adopted a neighborly tone and is telling a story about a time Dad went deep sea fishing with two other men from the church. When the story reaches a vaguely humorous highpoint — something to do with the one that got away — Rachel lets out a choked-sounding sob.

On my right, Becca steps closer. “You okay, Caz?” she whispers.

I lift the corners of my mouth in a faint smile as I nod to reassure her, then raise my gaze above everyone’s head and focus on the thick lines of clouds that stretch from the mainland, over the group gathered here in the middle of Four Points Island, and out toward the ocean.

Behind me, gravel crunches under tires, but I don’t pay much attention until heads around me start turning. The pastor pauses when quiet murmurs in the crowd grow louder and intrude on his claims of what a good father and husband John Allen was.

Four tall men are striding along the side of the gathering, heading straight for the front. My stomach clenches at the sight of them, and an icy blend of anger, dread, and panic passes through me. It feels like I’m caught in a nightmare.

Christine wraps a hand around my arm and leans close. “Are those your brothers?” She’s at least a decade older than me and has lived here for years, so maybe she knew them long ago.

Becca is staring at them too, biting her lower lip as she tracks the movement of the broad figures — two sets of identical twins who are unmistakable, despite how different they look from when I last saw them.

My jaw clenched, trying to keep from visibly shaking, I manage to say, “I don’t have brothers.”

Christine searches my face and I can see she’s full of questions, but thankfully she doesn’t voice them. Instead, she makes a sympathetic sound in her throat and rubs my back as I continue to watch the men. I want to look away, but I can’t.

When Rachel sees them, she cries even harder and throws herself into the arms of the first man to reach her. The others surround her; one of them hugs Michelle before turning his attention to his mother.

From this distance, I can’t identify each twin, but it’s clear that Barrett and Bronson are the taller of the four. Their dark brown hair is trimmed much shorter than they used to wear it, and their features have hardened to granite, shaded by dark stubble. The younger twins, Lennox and Lincoln, are the last to separate from Rachel. Their chestnut hair is thick and tousled, much as I remember it.

Even from a distance, the relief in Rachel’s eyes shines through, and something close to joy — despite all of the crying she’s been doing — now colors her face.

I keep staring until either Barrett or Bronson starts to scan the crowd. Quickly, I step forward and to the side, shielding myself behind a tall man and his wife who are standing close together.

The service continues, but I tune into it only enough to gauge its progress. My thoughts are a muddled mess of memories, all colored by red fury.

Out of obligation and to support Rachel, I was planning to go to her house for the get-together that will take place after the funeral, but now my plans have changed. Before the pastor starts his final readings, I quietly say goodbye to Christine and Becca and head for home.

“Caz? What are you doing here?”

I’m passing by Rusty’s office when the man himself calls out my name. I back up, stick my head inside his doorway, and frown at him in confusion. My red-and-gray-haired, bearded boss is wearing one of his usual flannel shirts. Paperwork is scattered in front of him on the desk. “It’s Thursday. I always work on Thursday.”