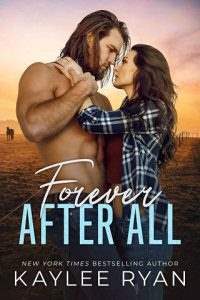 I grip the rope ladder as I climb to the treehouse. The rope is rough and itchy under my hands, but I don’t care. I’m mad at Corbin. We were playing hide and seek, and he was supposed to count to one hundred, but he skipped. I heard him. I wasn’t done hiding, and he tagged me out. He’s not playing fair, so I’m not playing at all.

Making it into the treehouse, I see my and Laramie’s Barbie dolls we were playing with before her brother, Rip, and his stupid friend, Corbin, convinced us to play tag with them. Who wants to play hide and seek when you can play with Barbies?

We were getting ready to have a wedding. Laramie has Ken in a nice suit, and my Barbie is in her wedding dress. Standing the two side by side, I start the wedding. I don’t need Laramie for this. I can have fun on my own.

Walking the two next to each other across the floor of the treehouse, I stop just beside the other Barbie set up to be the preacher. Every wedding needs a preacher. That’s how they have it on TV.

“Dearly beloved,” I say in a man’s voice. ’Cause the one I see on TV on that movie Momma watched last night was a man. “We’re getting married today,” I say in the same voice.

“McKenna! You up there?”

I start again. “Dearly beloved,” I say just as Rip’s head appears through the hole in the floor.

“What are you doing, Kenna?” he asks. His head tilts to the side, and it’s the same thing my mommy does when she’s asking me what I’m doing. Rip’s the only one who ever calls me Kenna. Everyone else calls me Mac.

“I can see that. Why aren’t you playing with us?” he asks as he climbs the rest of the way into the treehouse.

Rip is older than me by two years. His sister is my best friend, and she’s seven like me. “Because stupid Corbin cheated. He didn’t count all the way, and I was still hiding.”

“Come on. I’ll make him give you an extra turn at being it.” He tries to coax me.

“No. Ken and Barbie are getting married.” I ignore him and start again, “Dearly beloved—” only for him to stop me.

“I’ll play with you,” he says, reaching for Ken.

“No. Boys can’t play Barbies.” I reach for Ken but Rip moves so fast that I can’t.

“You’re in my treehouse.”

“It’s Laramie’s too, and she’s my best friend.”

“I’m your friend,” he says, his voice low. “How about we get married instead? That way, I’m not playing with Barbies.”

Dropping Barbie, I cross my arms over my chest and glare at him. “Are you going to make fun of me?” Rip and Corbin call us babies all the time for playing Barbies. “I’m not a baby,” I say as an afterthought.

“No. How about we have the wedding, and then I’ll make sure that Corbin gives you an extra turn?”

I think about it, and I really do want to play with them. My feelings were hurt, but I like it when Rip and Corbin play with us.

“I will. You don’t know how to do it.” I clear my throat and start yet again. “Dearly beloved,” I start. “These two people are getting married. Do you, Rip, take McKenna to be your awful wife?” I say in my man’s voice.

“Do you McKenna take Rip to be your awful husband?”

“You can kiss your bride.”

I sigh in frustration. “That’s how it goes, Rip,” I say, defeated.

“Fine. Let’s get this over with. Close your eyes.” I do as he says, closing my eyes and puckering my lips. When his lips touch mine, I feel… funny, and I don’t know what it means.

Rip and I pull apart, opening our eyes to find Corbin with his head stuck through the floor. “Shut it,” Rip fires back.

“I can’t believe you kissed her. Are we playing or what?” Corbin asks.

“Yeah, and McKenna gets an extra turn. You cheated.”

Corbin rolls his eyes. “Fine,” he grumbles. “Let’s go.” His head disappears, and I can hear him yelling down to Laramie, telling her that we were kissing.