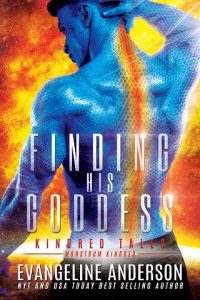 Lucy thinks the huge Monstrum warrior, T’zaren is a grumpy stick-in-the-mud.
T’zaren disapproves of the curvy little human female’s light-hearted view of life.
But when they have to go on a mission together as Lady and manservant and T’zaren had to serve her in some extremely intimate ways, will they change their minds? And will T’zaren ever succeed in…Finding his Goddess? To find out you’ll have to read this Enemies to Lovers, Grump and Sunshine, Fake Dating, Hot Alien Warrior Romance!

Is there anything worse than a grumpy man? What about a grumpy seven-foot-tall Monstrum warrior who seems to have no sense of humor at all? Lucy Heartwood doesn’t think so. She’s an optimist at heart with a bubbly personality and she’s not anxious to spend extended time with a stick-in-the-mud like T’zaren.

Unfortunately, the huge Monstrum is going to be her protector on a mission to save the Monstrum Mother Ship. They must travel together to the stronghold of Lady Twi’linda—a Twainer who has the only supply of dimriel crystals, which the Mother Ship desperately needs.

T’zaren doesn’t approve of Lucille—she’s not serious enough. But she makes the Sen Stripe along his spine flare like no other woman ever has, making her damn hard to resist. When he has to act like her manservant and “serve” her in every way on their mission, their strained relationship suddenly gets a lot more interesting. But when their hostess takes a turn towards evil and danger stalks them both, will he be able to save her?
And will he ever succeed in…Finding his Goddess?

“I just can’t get over it—it’s so great to finally have you on board the Monstrum Mother Ship, Lucy!” Iyanna said, giving Lucy another big hug—the fifth or sixth since she’d arrived. “I’ve missed you so much! Aren’t you glad you came?”

“I missed you too—I’m glad I finally got a break in my classes so I could come,” Lucy said, hugging her back affectionately and blowing a strand of long blonde hair out of her eyes as she did so. “My course load has been crazy lately and Aunt Delilah has been after me to help her set up the shop for Halloween. But a promise is a promise, so here I am!”

“Oh, I’m so sorry I won’t be down there this year to see the shop,” Iyanna exclaimed. “Is she doing a theme this year?”

Lucy’s Aunt Delilah, who had raised her after her parents died in a house fire, was a practicing Wiccan. She owned a shop that specialized in rocks, gems, and “power crystals.” In fact, it was from her that Lucy had gotten her interest in Geology, which she now held a PhD in. Aunt Delilah had a good sense of humor and loved to play up her “witchy” side on Halloween. Lucy had promised that as soon as she got home from her visit with Iyanna, she would help her set things up.

“She’s got a big fake cauldron and she’s going to put some dry ice and some green lights in the bottom of it and brew up a ‘potion,’” she told Iyanna. “The kids who come Trick-or-treating are going to love it. And of course we have to hang spider webs and put up a few skeletons and that kind of thing.”

“It sounds amazing.” Iyanna sighed. “I wish I could see it—please be sure to send me some pictures.”

“Well I can promise you it won’t be half as amazing as the Monstrum Mother Ship. I mean, everything you’ve shown me so far just blows my mind!” Lucy told her.

Iyanna had been giving her the grand tour and she was delighted to finally be seeing her friend’s new home. The giant golden spaceship which orbited Mars was enormous and filled with fascinating alien life, from the vines and creepers and flowers that grew everywhere to the Monstrum warriors themselves.

Iyanna had been begging her to come for a visit for months now. The two women had worked together as professors at USF for some time—Iyanna had a PhD in Botany and Lucy had one in Geology. Lucy had thought they were both pretty happy with their work. But that was before Iyanna had decided to go up to the Monstrum Mother Ship for a “research trip.” There she had found the Monstrum warrior of her dreams and had gotten married almost at once. And now she was extremely pregnant.

Lucy couldn’t help being a little envious of her friend. Iyanna was younger than her but she had already found her ideal life. She looked perfectly content—which was something Lucy couldn’t claim for herself. In fact, Iyanna looked so happy she was practically glowing, like one of the bioluminescent plants here on the Dark Side of the Monstrum ship.

“I have to show you the Dark Side while it’s all in bloom,” Iyanna had said, after taking Lucy all around the first half of the ship. “It’s so gorgeous right now—reminds me of the electric light parade in Downtown Disney when I was a little girl. All those glowing neon colors in the dark—you’re going to love it!”