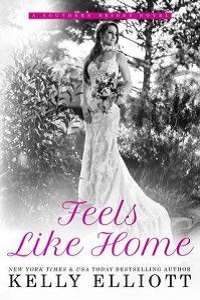 
I WOULD NEVER take the feel of Bristol wrapped in my arms for granted. I felt so at peace with her. Especially after we made love, which we had just done. The sounds of her soft breathing, the feel of her warm breath as it hit my chest. God, I loved her so damn much. And I knew what I was about to ask her to do was most likely not going to go over well.

“I met this guy tonight.”

I smiled and kissed the top of her head. “He’s older. He’s from Nashville.”

“Yeah, he said I had the voice and the looks to make it.”

Bristol turned and rested her chin on my chest. “Make it?”

Her brows pulled in slightly. “What do you mean?”

“He wants me to audition for a record company. He asked me to come to Nashville.”

Bristol sat up and smiled. “He did!?”

I laughed. “Yes! He really thinks the record executives would be interested.”

Bristol crawled on top of me, and I moaned when I felt her heat. It didn’t take long for my body to react.

“Anson, that is amazing! I always knew someday you’d catch the ear of someone. Now, how should we celebrate?” She waggled her eyes and rubbed against me.

I placed my hands on her hips and smiled. “Give me ten more minutes and I’ll show you how.”

She giggled. “When is he thinking you should make the trip? Oh, maybe we could plan a road trip this summer!”

I swallowed hard. This was the part I didn’t want to tell her.

She laughed. “No, seriously, when is he thinking?”

“Bri, he’s leaving tomorrow and wants me to meet him in Nashville, the day after.”

With a look of utter shock, Bristol shook her head slightly.

“What did you tell him?”

“I told him yes. Bri, this is the shot I’ve been looking for. To be managed by a company like Big Music Management is a dream come true.”

She nodded and moved off of me, pulling up the sheet to cover her beautiful body. A part of me hated that she had done that. It was something she’d never done before, and I couldn’t understand why she felt the need to cover herself up now. I could see her mind working, and I knew if I could just make her understand that it would only be for a short time…

“He said if I can give him two years, he thinks I could really have a successful career. I googled him, and he represents some of the top acts in country music.”

“Wait, Anson, what exactly are you trying to say here?”

“Bri, it’ll just be for two years, that’s all. If things don’t work out, we’ll come back to Texas.”

Her eyes widened. “And if things do work out? Then what?”

I shrugged, not really having thought that far ahead. “I guess we’ll figure it out.”

She stood and quickly started to get dressed. We were in the guest house on her folks’ farm. A place we often snuck to when we wanted to be alone now that we were both back home after college.

“It sounds like you’ve got this all figured out.”

I slowly got out of the bed and began dressing. “Well, I mean, I told him I needed to tell you first.”

She pulled her shirt over her head and stared at me. “Tell me. Not talk to me first? You had to tell me. Did you really think I would just pack up a bag and leave with you tomorrow, Anson?”

“Well, yeah. I mean, Bri, you know how hard I’ve worked to get to this moment. This is it. This is my chance.”

She closed her eyes and took in a deep breath. “I don’t think I can do this.”

“Do what?” I asked, suddenly feeling a vice clench around my heart.

When she started to cry, it nearly had me falling to my knees.

“You’re asking me to give up my life. Have you stopped to think about me in any of this?”

“Of course I have. Two years, Bristol, that’s all I’m asking you for.”

She shook her head and fiercely wiped at her wet face as she stormed out of the house and headed toward my truck. I followed behind her and opened the passenger door as she climbed in, then I walked around and got in the driver’s seat.

“You’re asking me to put my own dreams on hold,” she said. “Why are my dreams any less important than yours?”

“They’re not, Baby, you know that. This is an opportunity I can’t walk away from.”

She stared off into the distance while she got her emotions under control. “Anson, listen to what you’re asking of me. You met a guy tonight at a bar in Austin. He promised you a meeting with a record company but told you that you have to head back to Nashville with him tomorrow. How is this okay? You want me to pack a bag, leave my family and the town I love, as well as my own dreams behind, for a crapshoot chance at a singing career?”