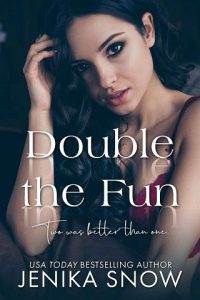 “Come on, Jane.” Trevor Lane ran his hands over her belly and started creeping up to her chest.

He reeked of alcohol, and she knew she should have never gotten in the car with him. He’d been fine when they left the restaurant, but when he started drinking Jack Daniels right out of the bottle and maneuvering the car with one hand, she knew this had been a horrible idea. Not only was he basically mauling her, but he was piss-ass drunk.

“Trevor, stop.” His kisses were slobbery and all over the place. Her neck felt slimy, and her heart was pounding hard behind her ribs from anxiety.

“Jane, quit being a cock-tease. I bet you ain’t no virgin, baby.”

If she could have pushed him away in the small interior of the car to slap his fucking face, she would have, but he was pressing her against the passenger side door and making any movement impossible. “Get off, Trevor. Now.” Whether she was a virgin or not didn’t make a difference. “I’m ready to go home.” That made him stop. He looked at her with a glossy expression only drunks get.

“You what?” He looked genuinely surprised by her demand.

“I said I want to go home. You’re drunk, and I’m definitely not having sex with you. Ever. In fact, give me your keys. I’m not letting you drive in your condition.”

A beat of silence passed between them before he answered, “Who the fuck do you think you’re talking to?” The venom in his voice shocked her. “You strut around like you want to jump on my cock, and now you’re denying me?” His anger filled the car, and Jane started to feel the tendrils of fear taking hold. “I buy you a nice dinner and play nice, and you’re going to sit there and tell me you want to fucking go home?” His rage was tangible, and Jane made a move to get out of the car, but his big hand landed on her arm.

If having dinner with a friend—which is what he was, or had been—meant that to him, he was delusional.

“I don’t think so, baby. You’re going to give me something for taking your ass out tonight.”

“Let go of me, Trevor.” She tried to sound hard, but her voice came out as a whimper. His fingers curled around her bicep, digging into the muscle and causing a squeak of pain to come out of her. All of this was too familiar. She pictured her father coming after her mother as she tried to protect Jane from the wrath that was Charles Silver.

“I’m not letting go until you make my night a happy ending.” With his free hand, he reached for the button of his jeans and popped it free.

“You either let me go, or I’m calling the cops and having them drag your ass to jail.” Her words stopped him for a second before disgust curled his upper lip.

“Do you really think they will take your word over mine? You’re just the daughter of an asshole who skipped town. He was worthless, just like you and your mother. Your family is nothing but trash.”

His words hurt, but not as much as his hand on her arm. She knew what she was, where she came from. Charles Silver had been nothing but a man who liked to beat up on his wife and daughter. He left them, taking every last dime they had and leaving her and her mother to pick up the shattered pieces. She couldn’t say she wasn’t happy to see him go, but despite all the abuse, her mother was a broken woman. It was clear she spent her whole life dependent on him, and it had taken Jane a lot of time and work to get her mother to be independent and have self-esteem.

She wasn’t 100 percent there, not even after several years of her father’s absence, but every day, she was getting better. Jane was just happy he was out of their lives. Jane and her mother Bridgette might not have had a lot of money, but they were picking up the pieces of their lives. The town of Ecstasy, Colorado might look down on them, but she knew as long as she had her mother, Rys, and William around, everything would be okay. They were the only three people in her life that mattered.

“I’m trash but good enough to fuck, huh?” She had been a fool to think anyone in this fucking shitty-ass town would see her as anything different. With her father’s reputation as a drunk and being poorer than dirt, she was considered the town white trash. She might not have been a virgin, but sleeping with one boy from out of town who had been visiting his grandparents one summer when she was seventeen didn’t constitute her an easy lay.