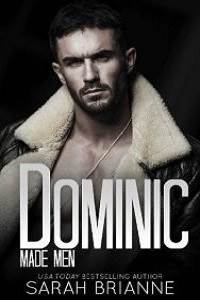 Dominic stood in front of the dark, mahogany desk that he grew up seeing his father sit behind. For twenty-seven years, he had watched his father’s black eyes become soulless more and more each day, until not even a thousand bright lights could bring a sparkle to them.

With his rich, hazel eyes, Dominic stared at the old, brown, tufted leather chair until Lucifer “appeared,” sitting in the high-back seat, disapprovingly staring back.

“Why did you call a meeting so late?”

He tore his eyes from his father’s mirage to look at his middle brother who, if he wasn’t covered in tattoos from the neck down, would have been the spitting image of a young Lucifer.

Matthias didn’t wait for an answer, continuing to speak with urgency. “If we’re making a plan to get Angel back, we should do it in the morning when everyone’s well-rest—”

“We’re not making a plan to get him back,” Dominic broke it to him harshly.

“What the fuck do you mean, we’re not getting Angel back?”

“You heard the Carusos …” Looking at an angered Matthias, it was clear his brother knew what it meant to leave their brother behind in the Carusos’ care. The two had shared everything, including a womb, both not only the spitting image of their father but of each other.

The twins were extraordinary—until they were split apart. What had made them alluring quickly vanished. It was like looking at half of a person when they weren’t together, and unfortunately for Matthias it was impossible not to compare the two. One twin was superior; sadly for Matthias, it wasn’t him. He needed his twin to be whole and to survive.

“Angel’s their insurance till the contract is complete.”

“You know Lucca; that could be months … years!” His brother’s erratic voice echoed off the concrete floors. “We can’t just sit here and do nothing!”

“We’re not.” For the first time, Dominic didn’t look at him like a brother, but a soldier. “We complete the contract.”

Even though Matthias’s almost-black eyes turned into slits, he saw the betrayal in them. “You’ve already gone to the Carusos begging for forgiveness, and handing over your own brother without even so much as a fight. Our father would kill you where you stand for what you’ve managed to do to the Luciano name.”

Turning back to the Luciano throne, Lucifer still sat there as stone cold as his pale skin.

“He’s why we’re here in the first place.”

Lucifer Luciano had been as depraved as a person could be, and unknown to Dominic, years ago, his father had left his mark on a fourteen-year-old girl with a knife, promising her that he’d return to claim her at eighteen. The Caruso underboss was also transfixed by the same girl, and while the two men were cut from the same psychopathic cloth, Lucca had not only taken her from Lucifer’s grasp, but he’d also taken her heart. Unable to accept defeat after years of waiting for his prize, Lucifer stormed the Caruso family home, shooting Lucca’s bodyguard five times before taking the sole thing that could start a war.

Dominic and his brothers were still alive because the girl told Lucca they protected her from Lucifer until the Carusos had shown up. The only reason the two mafia families of Kansas City weren’t at war now was because of the contract Dominic had agreed to, which the Carusos ensured by holding Angel’s life in their hands.

“Don’t worry, I plan to uphold the Luciano name.” The oldest Luciano spoke the promise so fiercely into the ether, it almost shook the ground beneath his feet.

The loud creak of the rusty door had both brothers looking at the youngest of the Luciano siblings.

“Everyone’s here,” Cassius informed them with a little nod of his teenage head.

Putting his back to his father’s image, Dominic stood proudly in front of the throne. “Send them in.”

The youngest brother held the metal door open as men filed into the abandoned factory that Lucifer claimed years ago. It wasn’t an ideal place to run a crime family, but there weren’t many options on the shit side of the city.

He remembered the first time his father brought him and his twin brothers here. They had been children at the time, so the space had appeared even larger. Dominic thought Lucifer had fucking lost it when he’d told him they would run the family business out of the factory, while Matthias and Angel thought it was awesome, looking at it as a skateboarding playground. He couldn’t even remember how many old T-shirts they’d gone through while dusting the space and the amount of blisters he had gotten on his palms from continually sweeping the concrete floor with the old wooden broom. It wasn’t until their father placed the desk and chair—where he sat now—did he see Lucifer’s vision hadn’t been crazy … at least, not then.