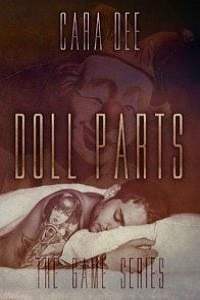 “Uh-oh.” I crammed a handful of chips into my mouth and scrolled through the contents of the folder, pretty sure I’d just found the reason Mom feared my stepdad was gonna divorce her.

I squirmed in my seat and pushed play on another video, as if I needed further confirmation.

No fucking wonder I had a crush on him. I had the best taste in guys.

I adjusted my dick and flicked a glance at the video’s caption. The Doll Doesn’t Make a Sound. A man was coppin’ a feel. He had his partner on display on a bed, arms and legs spread wide, a partner who wasn’t moving a muscle as the man touched him. And this seemed to be a running theme for the videos in this folder. One partner was always listless, whether the fetish was somnophilia, doll play, necro play, or something else.

If only I could explore KC…

Damn. My mom didn’t deserve him. I shoved some more chips into my mouth and moved on to the next video.

She was right about one thing, though. He was likely on his way out the door. I didn’t know how to feel about that. KC had been my rock for twelve years. Whenever Mom fell off her multiple wagons, I had him. At the same time, I knew what it was like to hide a part of yourself. Uncertain of how Mom would react, I hadn’t come out to her until I was eighteen. I’d waited in case she’d kick me out.

She hadn’t. She hadn’t been particularly thrilled, but she was okay with it. Now, a year later, she sometimes even asked me if I was dating.

I squinted, trying to remember how KC had taken the news. I’d been focused on my mom’s reaction… He’d been a little concerned, if I recalled correctly. He hadn’t said much, though. And now, that just brought forth a lot of questions. Was he gay? Bi? Something else?

I hadn’t spotted a single video with a het couple.

I checked my phone and realized KC would be home from work soon. Time to quit my snooping for today.

After clearing the desk of evidence and leaving everything the way I’d found it, I grabbed my bag of chips and returned to my room down the hall.

I bet he was gay. Something had happened after his folks died in a car accident last year. KC had become distant and scatterbrained, and I wasn’t sure it was grief anymore.

There was only one way to find out. I had to ask him.

I scratched my head and grabbed a couple drumsticks and my practice pad from the closet, then sat down on the foot of my bed and placed the pad stand between my knees. The way I saw it, I didn’t have anything to lose by confronting KC. I barely had any stuff left in my room, and I only stayed here when I worried Mom was about to do something stupid.

As long as KC didn’t walk out on me, I would be fine.

I let my sticks drop to the pad, and I eased into a quick beat, glad I had practice with my band tomorrow. It’d been too long, and I had frustrations to take out on my drums.

When KC got home, I was downstairs in the kitchen going through takeout menus. I had hopes of going back to my own place tonight, but I wasn’t gonna hold my breath. Mom was working late at the restaurant, which meant I wanted to be here when she returned just so I could get a read on her. I’d already searched through her bathroom and closet for shit I didn’t wanna find. So far, so good. No lottery tickets, no bottles, no pills.

But I still had my suspicions.

“Hey, kiddo. I didn’t know you’d be here.” KC offered a smile, his surprise evident, and placed his briefcase on one of the stools on the other side of the island.

“I thought I’d check in on Mom.” I shrugged lamely, glancing at him from the corner of my eye. “I forgot she was working late.”

“Ah.” He loosened his tie and sat down on the other stool. “You know that’s my job, right? Your job is to work, go to school, and have fun with your friends in the city.”