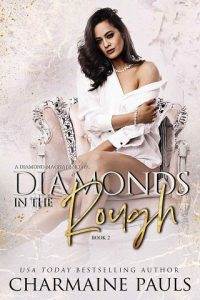 I dive for the edge, going after Zoe over the cliff. The thought of losing her hurts my chest. It hurts a thousand times more than the cold water. When I hit the surface, I don’t go down far. I turn and swim up like a madman. The sea is flat. I should easily spot her, but there are rocks all around. Shouting her name, I scout the water like a lunatic as a vise of fear closes around my heart.

Then I see her. Thank fuck. The relief is so great I’m not even angry. I swim with powerful strokes and reach her in five seconds. She’s gasping and splashing, treading water. Grabbing her around the waist, I turn her onto her back and swim us to the shore. There’s no way she could’ve made it out on her own, not knowing where the underwater rocks give way to form a channel.

I’m out of breath when we reach the beach, but not from exertion. It’s the fear. I’ve never felt anything like it, never cared enough. Dragging her out onto the sand, I put the revelation to the back of my mind to dissect later. I peel my jacket Zoe is still wearing off her body and cover her slender frame with my body, letting some of my heat warm her skin. Her teeth are chattering, and her limbs are shaking.

I lift her into my arms and start the steep ascend. The guards are waiting at the top, staring down with concerned faces, offering hands and assistance.

Holding her close to my chest, I hurry to the bathroom where I run a shower. When the water is warm, I push her under the spray and undress her. Since I destroyed her underwear, she’s wearing nothing but the red evening dress. Her lips are blue. So are her fingernails. I rub each of her hands between mine to warm them, and then her arms to aid the blood flow and increase her body temperature.

Somewhere between soaping her body and rinsing her hair, her teeth stop chattering. I brace her against the wall and drop to my knees in front of her. Droplets of water cling to her eyelashes as she stares at me, keeping her balance with her hands pressed on my shoulders. Her dark hair, normally wavy or curly, hangs straight and silky over her shoulders. Her breasts are big for her small body, her nipples a dark shade of pink. She doesn’t shave or trim the triangle between her legs, but even there her hair is soft and perfect, a pretty womanly shape. There are many kinds of beautiful and plenty of norms to define it, but she’s all of them, everything condensed into one.

Lifting her thigh, I hook it over my shoulder and worship her body with my hands. I circle her narrow waist and drag my palms over the curve of her hips, all the while watching her telltale eyes. They go hazy with need, the blue turning a shade darker, like the depths of the ocean. Her cheeks turn pink, and her nipples harden. I sweep a path down the outside of her legs and back up inside to her pussy. She’s slick and swollen, her flesh needing what I’ve denied her earlier at the hotel.

I hold her eyes as I go down on her, eating her like she’s my last meal. It doesn’t take long for her to break. When she comes in my mouth, her long lashes brush her cheeks, and she catches her bottom lip between her teeth. I eat her out through the aftershocks of her orgasm, lapping up all her honey with lazy strokes of my tongue.

She’s legless when I wrap her up in my robe and towel her dry. The exhaustion is a combination of my earlier punishing lesson, the sleepless night, the shock of what she’s seen at Alexis’s place, the afterglow of the orgasm, and coming down from the adrenaline of her goddamn jumping stunt. That’s a lot for one small flower to take in all at once.

She doesn’t protest when I carry her to my bed and pull the covers over us. I curl up with her back against my chest and her ass in my groin. I fold one arm under her head and the other around her waist. Like this, she’s secure in the prison of my arms, finally warm and sated.

Kissing her neck, I inhale the sweet scent of her skin. “What the hell were you thinking, Zoe?”

“I wanted to know if I could do it,” she says, her voice already thick with sleep.

“That would’ve been a bad thing?”

“Yes,” I say vehemently. “You’re never to do that again. Ever. Understand?”