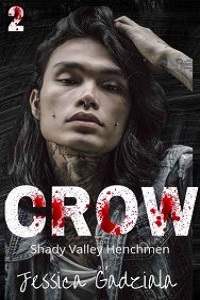 “Stop being such a pussy,” Raff demanded, grabbing the back of Riff’s neck hard in an attempt to keep him from squirming.

“When you’re the one getting a bullet fished out of your back, you can talk to me about who is being a pussy,” Riff growled as his knuckles went white on the edge of the table.

Why we were letting Raff play the doctor was anyone’s guess, given that literally any of the rest of us would likely do a quicker and less painful job.

“He’s looking a little gray,” Detroit said, looking over at me. “Maybe you should put him out of his misery.”

I guess, at the end of the day, if I was getting a bullet pulled out of me, I wouldn’t want it done by a twin brother who had a lifetime of small resentments to take out on me.

“Yeah,” I agreed, moving forward to grab the tweezers out of Raff’s hand, then leaning over his brother’s back to see the mess he’d made of the bullet hole.

But if I squinted, I could make out the outline of the metal through all the blood.

Target in mind, I plunged the tweezers in one more time, grabbing the bullet, and dropping it into the coffee mug on the table with a satisfying little ping.

“Thank fuck,” Riff said, letting out a choked breath as he reached for the bottle of whiskey, knocking off the cap, and taking a long swig.

“Alright,” Slash said, coming down from the floor above, still pulling a ribbed tank down over his body. “The fuck is it I hear about getting shot?” he asked as his eyes scanned the room, landing on Riff’s back. “The fuck happened?”

“Dunno. Never had this kind of trouble before. Not here in Cali, anyway,” Riff explained. “We’ve run into issues in the south, when we are picking up the guns. But never on the way back here. Seems like someone knows what we are up to, and wanted to stop us or steal from us. The car is fucked up.”

“We can handle the car,” Slash said, shrugging that off. “We need details on the attack.”

“Wish we had more,” Riff said, taking another swig of the whiskey as I reached for the alcohol to clean out the wound. “We were taking that turn over off of Forrest. One car cut us off at the front. Black sedan. Nothing fancy. Two guys got out. Bandanas up to here,” he said, motioning to everything below the eyes. White guys. Dark hair. That’s all I could see before they started shooting. Raff got low and tried to exchange fire. I reversed, then sped the fuck out of there.”

“It’s not exactly a secret what we do here,” Detroit reasoned, shrugging. “Finances are getting tight for a lot of folks. Could see some dumb-ass kids thinking they could make some easy money by taking our supply.”

“And they’ve probably been watching long enough to know you two come in alone,” Sway said, coming in from the bathroom with some gauze and wound tape.

“That changes now,” Slash said, focusing on Riff’s back for a moment. “Anytime you are heading in with a drop, you call us with a time that you’ll be crossing the state line, and we will meet you there.”

“I’m sure it was just a one-time thing,” Riff said, trying to deescalate the situation as I slapped the tape onto the gauze covering his wound, then turned away to wash my hands.

“We did get ambushed over in Vegas not that long back,” I said, shrugging, still able at times to see the blood on my hands as I looked down at them, feeling that familiar tingle of pleasure that danced across my nerve endings.

“It wasn’t that long ago that we were back at the mother chapter in Navesink Bank and were ambushed,” Sway piped in. “They are a much older crew with a tough reputation. And someone still tried to step to them. We’re pretty new here still,” he added. “It’s probably not isolated. It probably will happen again.”

“Exactly,” Slash said, nodding. “We should be safe here, but when we are outside of the clubhouse, we are vulnerable. Better to keep ranks close for shit that involves bringing in supply or taking it out. Judge, you know anyone in prison who might have been talking shit about stepping to us?”

Judge sighed hard as his girl hopped up off his lap so he could get to his feet and walk closer.

“Honestly, think most of the fucks who were in there, have been in there since before you came to town. Which might actually be the problem.”

“Well, if you’re fresh out, and your old crew has moved on, or you feel big and bad enough now to start a new crew. You know you can’t step to the Murphy family because they’ve had a foothold here for generations. And while the Novikoffs might be new, I think everyone knows you don’t fuck with the Bratva. It’s like stepping to the Italian mob. But a biker club? One that doesn’t have that many members yet? I could see some fresh out guy thinking they had what it takes to step to this club.”