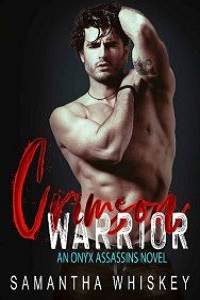 Alek: Meet me in the war room.

I glanced at the text message and wiped the sweat from my brow, then put back the two wakizashi swords I’d been training with, placing them in the long wall mount next to the katanas. My chest burned with exertion, but it felt good to shake the dust off the older weapons. I’d learned a long time ago that you had to fight with whatever was closest.

“You look good with those,” Benedict said, taking a break from pounding the shit out of the punching bag. Had to give it to the guy, though. He had one hell of a right hook. I’d been on the other side of it enough times to know.

“Thanks. Have to admit, I kind of miss combat before firearms.” There was no use for elegant weapons like these, now. Not when a bullet did just as much damage with a fraction of the effort.

“Only you would.” He grinned and went back to slugging the bag.

Across the gym, Olivia climbed out of the ring where she’d been sparring with Valor—Lachlan’s mate. The human was fast for a…well, human, but Olivia always took it easy on her.

Olivia was the fastest vampire I’d ever met in my life, and being the combat master for the Order meant I’d met more than a few vampires.

But in my hundreds of years, I’d never met one like her. Olivia Sorokin was one of a kind. Her lethal grace made her the most exemplary bodyguard I’d ever had a hand in training, not that I’d taught her much. By the time I’d arrived at the selection, she’d already proven herself deadly with blade, bow, and firearm…and that was back when muskets were a thing. Between her fighting skills, speed, and ability to act as a body double when needed for Princess Avianna, Olivia had been the perfect fit.

I yanked my eyes off the spandex that perfectly fit her phenomenal ass and typed out a reply to Alek.

Ransom: On my way

I hit send and ducked down to the refrigerator as Olivia came my way, her brow puckering as she responded to a text herself.

“Catch,” I called out, already tossing the extra bottle of water I’d grabbed.

“Thanks,” she answered, snatching it out of the air like a major league ballplayer.

The woman had instincts.

She flashed me a smile, and I had to remember how to unscrew the lid on my bottle. Her moves weren’t the only thing lethal about her. Olivia had a smile that would have launched a thousand ships if we were back in the era of Sparta and Troy. Hell, it probably would have launched them now if she’d ever shown interest in marrying or seeking a mate.

“No problem.” I grinned, then fumbled with my bottle. “Righty-tighty, lefty-loosey,” I mumbled under my breath.

“What?” she asked, tossing her long, thick braid back over her shoulder. The mass was the color of fresh espresso, which went right along with her scent—warm, rich chocolate and hazelnuts.

Twenty minutes around her, and I was always jonesing for a jar of Nutella.

“Nothing.” I twisted the top open and drained the whole bottle as we both headed for the door.

Two female trainees, both in their twenties, paused in the hallway just outside the door as we approached. Clarissa and…fuck, what was the brunette’s name…Sally? Sarah?

Sophia. That was it.

“Ladies,” I said, offering a smile as we passed by.

“Ransom.” Clarissa sighed my name as she fell back against the wall, her scent flooding the underground hallway with—

“Damn, doesn’t that ever get old?” Olivia asked as we both took a left at the fork in the tunnels, passing by one of the younger male trainees. In my defense, I didn’t know his name either. I wasn’t sexist. I just didn’t have time to get to know people. Not at the current state of our world.

“Leaving the gym at the same time as you? Never.” I grinned, keeping a healthy twelve inches between us, so the females didn’t get any ideas. Olivia had come too far in her career to have the younger generation gossiping about shit she didn’t even do.

Which was exactly why I kept my distance from her.

Was she hot as hell? Yes. Funny? You bet. Would I have given my left nut to spend a single day with her in my bed? Absolutely. But there was a line even I wouldn’t cross, and that line was Avianna—the king’s little sister. She’d raise holy hell if I screwed with her best friend and bodyguard.

Besides, the thing about being an immortal vampire was that your hookups were immortal, too, and the only thing more awkward about an evening after a one-day stand was having to work with that female every night. Since I knew better than to seek out anything more permanent in the relationship department—I risked my life too often for that bullshit—that left Olivia and I at friends. Only friends.