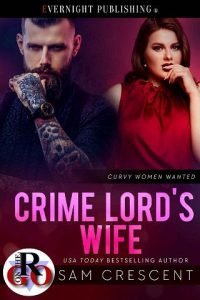 “Excuse me?” Rose Miles asked, looking at her husband and not the heavily inked man wearing slacks and a crisp white shirt with the sleeves rolled up.

The mystery man held up the wedding band she’d given to her husband two years ago. At times, she truly believed it was the biggest mistake of her life. Sean Miles hadn’t exactly been loyal, loving, or kind. There were many nights when he didn’t come home, and she was grateful until the debts started to roll in. He’d stopped paying the rent, the electric, and the money disappeared from their joint account, and he never told her why. What Sean didn’t know was she’d opened a separate bank account and in recent weeks, she’d been looking at a possible divorce.

She didn’t want to live with him anymore. This wasn’t the married life she wanted.

“Okay. So, you come in here at two in the morning and tell me to pack up because my husband decided to put me up for sale in a card game.” She laughed. “You think I’ll consider this legal?”

“It is legal and binding,” he said.

“Hell, no. Selling a person in a card game is not legal. I don’t give a crap.”

“Do you have a million dollars?” Sean asked.

“What?” There was no way she heard that price. Surely? It would be crazy, even for her husband.

She looked at the man who was supposed to be the love of her life but had actually turned into one giant disappointment.

“How can you even join a damn thing like that when you don’t have that kind of cash?” She clenched her hands into fists.

She looked at the man. “Who are you? I don’t even know you.”

He stared at her for a few seconds. She hated his perusal. It made her nervous.

She put her hands on her hips, trying to calm her nerves. “I’m guessing that if I don’t go with you, bad stuff happens?”

Glaring at Sean, she nodded. “Fine. I guess I’m your property for however long this happens to be. Do I get to go and pack a bag?” Maybe she could escape out of the window, even if she was afraid of heights. Any height, that was. She couldn’t stand to be near a window. Opening the curtains was a challenge if she allowed herself to look down.

She shook her head. “At least you’re honest.” Glancing at her husband and then at her owner, she couldn’t believe this was happening. As she stepped toward him, he put a hand at her back. Then she noticed the three other men in her home. They all looked dangerous, like they’d stepped right out of a gangster movie. Only this wasn’t some source of entertainment. This was her life and they were part of it.

Nibbling on her lip, she averted her gaze as Jared urged her forward.

Why was she agreeing to this? This wasn’t her debt. She stopped.

“If you think you can argue with this, think again. You’re married to him. Whatever happens to him for not paying a debt will come down on your shoulders.”

“You’ve got to be kidding, right?” she asked.

“Your husband thought he could play with the big boys. He’s going to realize he is nothing more than a child in the scheme of things. He thought he could bluff his way to the top. There is no such thing.” He pushed her forward and rather than put up a fight, she followed him out of their home, and into the night. There was a black car waiting; of course there was.

Another gangster type stood holding the back passenger door open.

She thanked him and climbed in. Being polite had been drilled into her when she was a child. Her parents hadn’t believed in rebellious children and any out-of-turn speaking was met with a slap.

Pushing those thoughts to the back of her mind, she put the seatbelt on. She glanced at Jared to find him watching her.

“I’m just staring at what now belongs to me.” His finger traced down her cheek, going to her neck.

She grabbed said finger and held it. “Don’t.”

He chuckled. “You think you’re in any position to tell me what to do?”

“You’ve got yourself a wife. Don’t you know there’s no touching, not even any talking, or anything like that when it comes to being married?” She gritted her teeth. That was her marriage, even after the short time they’d been together.