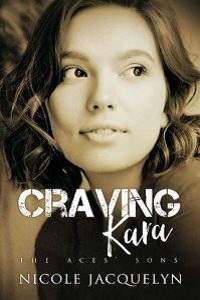 I cracked my knuckles—the only show of nerves that I allowed myself anymore—as I watched the door across the room. It had been a month since I’d seen Kara and I didn’t want to miss a second of being in her presence. I felt starved for her. It was pathetic, really, the way I used her visits to keep me going. It was also supremely fucking unfair to her, which was why I never let on how important her visits were. She was young, and since I’d been inside, the small age gap between us seemed to have widened exponentially. She was still going to school, getting yelled at by her parents, and figuring out where to send her college applications, while I… well, I spent the morning carrying around a contraband joint for a guy called Mutt because we’d heard that his cell was going to get tossed—and I owed him.

It was a whole different world inside, and I was trying to figure out the best way to navigate it. Sometimes, I felt like forgetting home was better. I’d spend the entire day refusing to think about life on the outside—our house, what my parents were doing, if Curt had completely trashed the media room now that I wasn’t there to tell him to clean up his mess—but always, by the time I laid my head down at night, I’d put myself into a panic, forcing myself into remembering every miniscule thing I could, terrified that I’d forget what real life was like.

My pop had told me to keep my head down and do my time. The club had set up protection for me inside, which was a relief, but that protection didn’t come without strings. Mutt was the main watchdog, which worked out pretty good for me because I actually liked the guy. He reminded me of my Uncle Grease a little. But there were others, too, men who made it known that they’d step in if anyone fucked with me. The consequence of being protected so I didn’t get raped or stabbed in the shower? I had to run errands, pass messages, hold shit that could get me into serious trouble, and occasionally be a rat. It was a more than fair trade, but it still fucking sucked.

I hated it. I hated the way everything smelled. I hated being surrounded by men who would as easily stab me in the throat as look at me, I hated the isolation and my cell. I hated the food. I hated the fact that I couldn’t go outside until my designated yard time. I hated the boredom and the tedium and the motherfucking fluorescent lighting that had started giving me migraines.

But what I hated most of all and could never tell anyone was the fact that I felt like I had a bullseye painted on my back and I was scared all the goddamn time. Wanted-my-fucking-mommy terrified. I’d had to teach myself to freeze instead of flinch anytime someone surprised me. Weakness, no matter how protected I was, could get me killed. I barely slept.

I held my breath as the door opened and the visitors filed in. My eyebrows rose in surprise as Charlie and Curt came walking through the door with my mom. The group always had to have an adult with them when they visited, which seemed incredibly ironic since Curt was my twin and I fucking lived in the prison—but whatever. Where was Kara?

“Hey!” Charlie said, dropping onto the bench across from me. “How you doin’? You okay?”

“Hey, baby,” my mom said as she sat down last, her jaw tight. She took great pains to hide how much she hated that I was in there, but it was impossible for her to mask every expression. Her loathing for the guards that barked out orders any time she got too close to me was a palpable thing. If she could’ve carried a weapon inside the prison, I had a feeling she would’ve done something stupid.

I waited for a minute for them to tell me where she was, but finally spoke when no one else did.

“Not that I’m not happy to see ya,” I said to the small group. I cleared my throat. “But I thought Kara was comin’?”

Jesus, it felt pathetic to even ask. I hated that, too.

“She called last night and told me she couldn’t make it today,” my mom said with a small shrug. “So, I let Charlie know, since it was her turn next.”

“As far as I know,” Charlie replied, nodding her head. “Maybe she just had family shit or something. I don’t know. I haven’t talked to her.”

“You should make sure everything’s okay,” I said, the words tumbling out of my mouth before I could stop them. I couldn’t believe that Kara had missed a visit unless something was wrong.