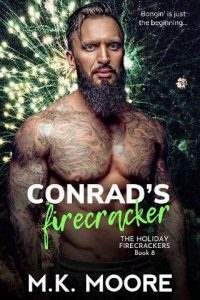 “Scene safe,” I say into my portable radio as I approach the car fire at the on-ramp to the interstate. A champagne-colored minivan has hit a light pole and from my initial assessment of the scene, there is a small fire under the hood. As the first responder, EMS nor the sheriff have arrived yet. Fuck, I am not even on duty yet. I am working with the Beta Squad today since the rest of the Alpha Squad is off, enjoying the lake. The scent of gasoline and oil is thick as I reach the car. Shit. I check the car and see that there are two occupied car seats in the back seat. The kids appear to be fine. This is why I should never go to calls alone. The girls are twins, probably about two years old. They are bouncing along to whatever is playing on the tablets hung on the back of the seats in front of them. The driver of the minivan appears to be unconscious. I shouldn’t even be here right now, but duty calls. I heard the call on the radio while I was on my way to work. I responded to dispatch that I’d be on the scene in less than a minute. Working on July 4th sucks, but I can’t complain about the holiday pay. Besides, a day at the lake with all the guys and their significant others is not how I want to spend the day.

“How bad is it?” Sally-Ann, the Beta Dispatcher asks.

“It’s bad,” I tell her, as the flames from under the hood suddenly shoot ever higher. “What’s the ETA on the paramedics?” I open the side door and quickly unbuckle both girls, grab a tablet, and carry them to safety far into the grass on the other side of the ramp. Despite what’s going on, they are calm.

“Still ten minutes out,” she says. The only downfall of living in a small town like Heart Falls, Montana is that it takes time to get anywhere. The one and the only fire station is located a good eight miles from the one and only interstate entrance.

“Can you be good girls and wait for me right here?” I ask, but they ignore me, choosing to watch the tablet instead. It’s just as well. I am pretty sure they will be reasonably safe here. There’s hardly ever any traffic on the interstate. To be honest, I’m surprised the accident was reported by someone.

Reaching the driver’s side door, I wrench it open and immediately check for a pulse. The woman is alive, but barely. After a quick once over to be sure her neck is stable enough to move, I pull her out of the car, carry her over to the grass, and lay her gently on the ground.

“We need a water tanker here now,” I shout into the radio, losing my cool as the minivan explodes. Suddenly, the hundred feet or so I took these people to safety doesn’t seem like it’s going to be enough. I am thankful I set the woman down by the kids because as soon as car pieces start to rain down, I carefully throw my body over them all. A few minutes later, I can hear the sirens coming closer until the trucks screech to a halt behind me.

“Captain? Are you okay?” Their new probie, Ash, asks, running over to me. His brother, Alex, is on my squad.

“Yeah, Lynch,” I tell him. I look up at him when he says nothing else and find him staring at the woman on the ground. “Do you know her?”

“Who?” I ask standing up, the name not sounding familiar to me. I thought I knew just about everybody in town.

“She was Amy’s English teacher last year. New in town. No husband. All the old biddies talk about her and illegitimate babies at the hair salon, according to Amy.” Amy is Ash and Alex’s little sister. That explains that. I graduated high school over twelve years ago now.

“Alright. Let’s see if she has any family nearby,” I say. We work the scene and clear it as quickly as possible, getting all three motorists to the hospital to be checked out.

“Didn’t she used to date Johnson?” he asks suddenly.

“Did she?” I ask, racking my brain trying to remember back that far. I look over at the little girls and realize those are his girls. Why didn’t that dick ever say anything?

“Call him, he’ll know if she’s got any family nearby. He’s up at the lake, so keep trying if he doesn’t answer right away.”

I hop in my F-250 and head into town after Benny, the tow truck driver from the gas station, comes to remove the burnt-out van.

Being in a small town, we work together with the sheriff’s office since there is just the sheriff, Talon, and his deputy, Joe. They have a receptionist; Dolly and we all use Regan and Sally-Ann as dispatchers. With less than 12, 000 residents, we do what we can to keep everyone safe. Heart Falls is located sixteen miles south of Billings and everything including the hospital and grocery store is in Billings. We just have a gas station, a beauty salon, a bar with pub grub, and a small diner here.