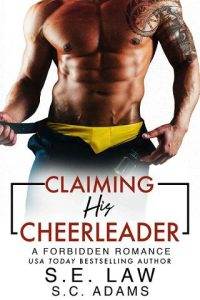 I’ve had my eyes on Brand Danner for ages now. The older man comes over for poker night at our house, and I know he sees me. In fact, one time I wore a loose v-neck …

… bent over in his direction …

… and Brand’s eyes practically popped out at the creaminess on display!

So what if the handsome trucker is two decades older than me? He’s got broad shoulders, thighs like steel, and a drive shaft that makes me want to go on a long road trip where I never come home.

In fact, I lie awake nights wondering how to take things with Brand to the next level. He’d make me pant and squeal in the front seat of his truck, for sure.

But now, opportunity’s finally here. Brand’s coming over to watch a football game this weekend …

… and I’m not holding back. I’ve got the perfect cheerleader’s outfit with a tight sweater, short skirt, and best of all red and white pompoms…

… that I’ll use to tease and taunt.

Hopefully, the handsome alpha male won’t be able to resist because I plan on cheering him on … all the way until he’s put a baby in my belly!

This is a follow-up to Trapped by the CEO, except this time, we’re with Emory’s friend Janie as she schemes and dreams about snaring a hot older man. Little does Janie know but Brand’s not just into cheerleading outfits … he’s into sassy cheerleaders who can entertain with the best of them! Grab a cold drink because baby, you’ll be doing backflips by the end. No cheating, no cliffhangers, and always a HEA for my readers.

I smile mischievously as I twist and turn this way and that, looking at myself in the mirror. I’ve changed out of my sweatpants and into jeans and a low-cut T-shirt instead. It’s not a crazy outfit, but it serves my purposes because I want to look sexy tonight. After all, it’s my favorite night of the entire month: poker night.

My mom’s boyfriend Jerry is hosting, and he always has a couple friends over to drink, smoke cigars, and play cards in our dimly lit kitchen. But I’m not wearing this outfit for them, oh no, because most of Jerry’s friend are just like him: gross and lecherous. After all, Jerry really takes things to the next level and I have no idea what my mom sees in him. The old dude always smells horrible because he hardly ever showers, and he walks around with bare feet that are cracked and peeling, with a toenail or two falling off. Technically, Jerry works as a trucker, but he almost never leaves the house because he’s out on disability right now since he supposedly hurt his back on the job. Yes. My mom moved her boyfriend in with us a couple months ago, and it’s been hell on Earth since then.

But who knows what Sheena’s thinking? My mom is my mom and Sheena’s always had a soft heart. Personally, I think Jerry’s “disability” is a load of bullshit and he just wants to live in our house for free without a care in the world, since he doesn’t contribute to bills. Seriously, is Jerry a grown man or a child? What man doesn’t at least contribute a nominal sum to the household expenses?

Regardless, I gag every time I see that geezer walking around in his dirty underwear. He’s got tightey-whitey’s that sag off his flat butt, and it’s sad to say, but the elastic is sometimes so loose that I actually get a glimpse of plumber’s crack even when he’s not leaning over. Needless to say, vomit has literally come up to the back of my throat and I usually look away as fast as possible, it’s that bad.

But at least there’s a silver lining to all this: Jerry’s hot friend Brand Danner, who comes over for poker most months. He’s the only one of Jerry’s buddies who’s acceptable. Actually, Brand’s fucking gorgeous and I’d love to get a piece of him. He’s got black hair, gleaming blue eyes, and the body of a professional athlete. He’s older too, probably in his mid-forties, but his age only makes him more desirable in my mind. The things he could teach me…

But for now, there isn’t much that I can do aside from tease Brand a bit. A little fun times never hurt anyone, did it? That’s why I put on my loosest t-shirt. It’s a little raggedy, but the material is super-soft and the v-neck deep. The décolletage looks pretty normal when I’m standing, so no one will suspect, but when I lean over, hoo-boy! You can see my tits, that’s for sure. Yes, I’ve decided not to wear a bra tonight, so Brand’s getting a show.

It’s a naughty plan, but I’m excited. Right now, Jerry and his buddies are all in the kitchen right now, laughing loudly, drinking beer, and playing what’s probably their fifth hand of the night. Brand must be in there with them, and my body heats in anticipation.