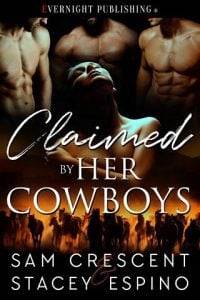 “There isn’t anyone you haven’t pushed away or scared off,” Archie Wales said.

Gabe Cartwright stood up, tired of being singled out. He wiped the sweat from his brow with his sleeve. There wasn’t even a breeze to kill the heat. He looked at his friends and roommates, Archie and Vinny. They had all argued for many weeks about hiring a housekeeper. Personally, he didn’t want a fucking stranger walking around their house or anywhere near their shit. He worked hard for everything he had, and he did not trust easily.

“What are you babbling on about now?” He didn’t have time for this. There was too much to get done on a working farm without arguing about nonsense. Already, he noticed another fence that required mending, and they had orders that needed to be filled before sundown.

For so long, Archie and Vinny had been after him about hiring a housekeeper. It still hadn’t happened. Most of the people who previously applied were only after easy work. He had yet to hire anyone he could trust.

“Well, we have a winner, thank you very much. The pretty little Annalise has applied, and she also brought tester cookies. Not even you can disagree with this pick.” Archie held up a single cookie, and Gabe couldn’t argue. They did look tasty, but he wasn’t easily swayed by food.

He was the current cook on the ranch, and the boys were used to one thing, steak and potatoes. That was all. He didn’t need to learn to cook anything else.

“Come on, man, you have got to try these. They’re so good. They’re going to give you wet dreams.”

“Not happening,” he said, bending down to fork the straw from one pile to another. He noticed out of the three of them, he was the only one working. “If you want to get this job done today, and get an early night, hurry up.”

Vinny chose that moment to laugh. “Come on, we work our asses off all the time. And you’re the one working harder than anyone else—cleaning, cooking. It’s work you don’t need to do. We can afford to hire, Gabe.”

“We’ve got up to five ranch hands already.”

Gabe knew they were well off. After all their hard work, ranching was finally turning a profit, a pretty healthy one, but he wasn’t about to tell the guys it was because of a few investments on the stock markets that had kept this place open.

He, Archie, and Vinny had been best friends since they were kids. All of them came from deadbeat families, with drunks or addicts as parents. Gabe got his work ethic from not wanting to end up like his dad, not by example.

Together, they had joined as a unit. Just the three of them, working two and three jobs at a time to help get a down payment for this place. Even as a kid, the Hollington Ranch had been in disrepair. They would sneak off to the ranch for a place to hide while their parents were having one of their benders. Mr. Hollington would leave out snacks and sodas, along with blankets and cushions. He never said anything to them. Never told them off nor called the cops. He was a good guy.

The news of his passing had hit them all hard, and even though they weren’t invited to the funeral, they each went and paid their respects. The ranch went up for sale, but no one bought it until they did.

It had taken a lot of years, hard work, and love, but the ranch house was back in impeccable condition. The land once again had cattle, and they had expanded to allow horse boarding, cash crops, as well as renting out small animals for kids’ events. They may be simple cowboys, but their entrepreneurial spirit got them where they were.

Ranch life was busy most of the time, and if he was honest with himself, Gabe preferred it that way. Too much time in his head was never a good thing.

A housekeeper would ruin the peace they’d taken years to find. At the same time, steak and potatoes had long lost its appeal. The cookie Archie ate had looked good.

Archie tossed the bag in his direction, and he caught it, not surprised to see there was only one left.

After taking it out, he took a bite, and fuck him, he’d never tasted anything so good. It was sweet, but not too sweet. Each bite seemed to have just the right amount of chocolate chips in it. There was even a hint of salt that he loved.

“She’s a good cook, but she’s willing to come in and cook for us for a full day—breakfast, lunch, and dinner. She’ll also work on a trial basis,” Archie said.

Gabe finished the cookie in two bites, and the moment he swallowed the last mouthful, he mourned his cookie. This was ridiculous. He was a grown man. He didn’t get sad over baked goodies.