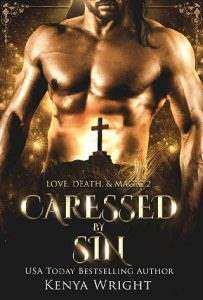 Whispers swirl throughout the supernatural underworld of Fatou, the fairy with the venomous fangs. They say she hunts incubus demons, not for money, but to clear a debt with a powerful wizard.
Time is winding down. Fatou has only a few days to clear the balance. Desperation forces her to go after a high-level incubus demon named Azar.
The hunt begins.
Fatou sets a seductive trap. But, Azar is no fool and has his own spellbinding charm. Both end up capturing so much more and triggering a romantic adventure that neither one of them are prepared for. But, can they save Fatou’s daughter? Or they both die trying?

I have to save my daughter. This bounty will do it.

The nightclub’s music blasted into a high-intensity, frenetic beat that made the air reverberate.

Laser projectors hanging from the ceiling spun and twisted as they shot out multi-colored lights. Red, yellow, green, and blue beams collided and splintered in time with the music blasting from the speakers. The light show was accompanied by the drums pounding and mechanical, electronic guitar riffs of the song.

Hundreds of humans lost themselves in the rhythm. The song’s low frequency throbbed into their bodies, making their heartbeats race.

This was an incubus demon’s perfect feeding ground. No one here would be suspicious of a gorgeous man making out with multiple women.

In fact, they’d root him on.

I fanned cigarette smoke out of my face and watched my target—an incubus demon named, Azar. Due to his supernatural level of beauty, I knew he had to be high-level.

Azar leaned back on the silver wall near the dance floor and wore an opened shirt with leather pants. Different women touched his body and stroked his muscular chest.

A mass of long, charcoal black hair framed his face

Azar fed from the women’s arousal, drawing their sexual energy into him.

Some of the women's eyes glimmered solid white. They kissed his face and traced his rows of golden muscles with their tongues, completely oblivious to the incubus demon’s actions.

Damn it. He’s powering up.

I took a large gulp of rum. A burning sensation traveled down my throat.

After a fresh feeding of sexual energy, it would be difficult to beat him. The power gain usually boosted strength, speed, and some magical abilities.

Arousal was a boost up.

Orgasms were a powerful life force. Therefore, if he ended up fucking them, he would grow even stronger and heal faster.

Some could create illusions and mental manipulations around you.

I had no idea what powers he’d grown into. Many low-level demons between 50 to 100 years old were only a little stronger than humans. Plus, they had physical characteristics that were hard for them to hide—fangs, claws, pointed tail, and wings.

As they surpassed a 100 years, incubi grew into maturity—those characteristics disappeared and they transformed into pure beauty—the sort that was hard to turn away from.

He must be over a hundred. I could feel his great power from over here.

An Incubus spent most of his years seducing human women and feeding on their sexual ecstasy. During the day, they lounged around and hid. At night, they hunted, licked, sucked, and fucked, draining woman after woman.

And there was not much a human could do to defend themselves. Incubi were supernaturally attractive, charming, and irresistible. In fact, few beings could resist their charms, and even fewer would want to.

I crossed my legs and tapped my stiletto against the bar.

There wasn’t much that could trap or be used as a weapon against a demon like Azar. Objects blessed through prayer by a man of true faith— a priest, rabbi, monk, or even a shaman—could cause some excruciating pain for him. I had a blessed dagger.

Holy water served as acid. Once thrown on him, it would burn his flesh. The problem was that in seconds his skin would heal and then I would have a pissed off demon in front of me.

Unlike other hunters, I had an extra weapon that was unique to me.

I’d been born a simple fairy and lived beneath the Paps hills, three miles inland from Senegal’s Goree Island.

My people only came outside to dance in the moonlight and sip plum wine.

One night a herd of vampires discovered our feasting and changed everything.

I shook my head, not wanting to think of the past. I had too much on the line to not focus on this target.

I turned back to my target.

The women explored Azar more. One licked his thick neck. The other kissed the rows of muscle on his waist.

That can’t be right.

Surely, being stroked by seductive women would be appreciated by any man, even one that was no longer human.

I brushed my wig’s brunette strands out of my face and raised my eyebrows as Azar’s leather pants expanded and stretched over his erection.

He must be enjoying some of it.

Another woman with long red hair strolled up to him. His power must’ve drawn her to him. Instantly, she began running her fingers through the his long, wavy hair.

How many women does he need to feed from?

Most incubi only had to drain one woman a day to survive. Azar had been feeding all night.

My sadistic boss, Adae, had given me an inaccurate report on Azar, claiming that he was an easy catch. I would have to curse Adae out later.

I chewed the inside of my cheek, noticed what I was doing, and forced myself to stop. Hopefully, Azar hadn’t trapped any other women into a spell and drawn them to him. He’d be too strong, alert, and difficult for me to catch.