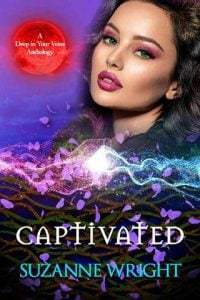 I paused in bopping my head to the music as my friend sidled up to me, looking rather red in the face. “You’re blushing,” I said. “Why are you blushing?”

Ava glanced around, ensuring no one at the afterparty was close enough to overhear. “You can’t tell anyone. I mean, the guys probably wouldn’t care, but they are kind of shy and likely wouldn’t be making out in a dark corner if they were happy to go public.” She twiddled her fingers. “What do you think?”

I turned to fully face her, now the height of intrigued. “I think you need to tell me who’s getting it on.” But the small brunette hesitated. I groaned. “Come on, Ava, you can’t let something like that slip and then clamp those lips shut. Tell me who you saw making out.”

She leaned toward me and whispered, “David and Denny.”

She smiled. “I know, right? I’m kind of excited, because they really suit each—Dude, no, you can’t go look.”

“Oh, I only want a little peek. Guy-on-guy action can be hot.”

I snorted. “Like you don’t want to go watch more of the show.”

Ava tried stifling an impish smile but failed. “Okay, I kind of do. We can’t, though. It would be wrong.”

“So very, very wrong. Which makes it hotter.”

“Girl, you’re in dire need of getting laid, aren’t you?”

Undeniably, but ... “We’re not talking about me. We’re talking about David and Denny.” The two males were part of the Grand High Vampires’ legion made up of over a hundred vamps. There was only one female squad—Ava and I were both part of it. “I’m not really surprised that this happened. Something’s been brewing between them for a while.”

“I know. I hope it’s serious. They’re so cute together.” She let out a dreamy sigh. “Let’s not say anything about it to anyone else. It’s their news to tell. I know it’s hard keeping secrets on such a tiny island, but we can at least let them be the ones to spread the news—or not.”

I nodded. “Agreed. We say nothing.” The aforementioned tiny island was privately owned by the Grand High Pair and set in the Caribbean on which our gated community known as The Hollow had been built. There was no way to get bored here, because there was plenty of entertainment, including a nightclub, cinema, and bowling alley.

Hearing a loud laugh, I looked over to see another of my squad members, Alora, leaning into her mate, Evan, while chuckling at something one of the many party guests was saying. I nudged Ava and tipped my chin in Alora’s direction. “She looks so happy. And Evan looks so smug.”

Ava snickered. “Well of course he does. He’s been pressuring Alora to Bind herself to him for a while now.”

I understood why Alora had hesitated to rush into anything with Evan. It was no small thing to enter into a Binding considering a psychic link formed between the couple that was so invasive your partner would feel your emotions, hunger, mood, and even be able to sense your location.

For a long time, it was believed that such connections could only be broken by death, but my best friend and fellow squad member, Imani, had the ability to sever such links, including blood ties. Still, no one would ever make such a commitment lightly.

Bindings were week-long celebrations that culminated in a beautiful ceremony. The festivities featured everything from fancy dinners to paintballing, depending on the couple. And as Evan was the Grand High Pair’s Heir, master vampires had come from far and wide to attend.

The grand garden was decorated beautifully with butterfly lights, torches, and candles. Many tables circled the man-made dance floor, which was currently far from empty. Most of the dancers were vampires, but a few were intoxicated humans—feeding from them was the only way our kind could get drunk. Many vampires were blitzed at this point. And since such celebrations could go on past dawn, most would be absolutely hammered when the afterparty came to an end. It wasn’t unusual for some to crash on the beach and sleep the day away after such events. Contrary to popular belief, sunlight didn’t hurt us.

I was ever so slightly on the tipsy side, but I hadn’t fed from more than one drunken human tonight. Mostly because I was still bloated from the Binding feast. Vampires didn’t need solid food to survive, but we certainly indulged.

“Evan’s looking mighty fine in that tux,” Ava commented. She slid me a mischievous look before tipping her chin toward a particular cluster of guys. “Max is looking rather dashing, too.”

I ignored the flutter in my stomach. It didn’t matter what the male in question was wearing—he always looked like he’d just stepped right out of a ‘Sexiest Men Alive’ article. Long and lean and muscled, Max Kincaid was all kinds of delicious. His watchful eyes made me think of a mountain lake—cool, calm, startingly blue. His mouth was nothing short of carnal; it could curve into a warm, sexy as shit smile just as easily as a cruel, you’re-so-fucking-dead grin.