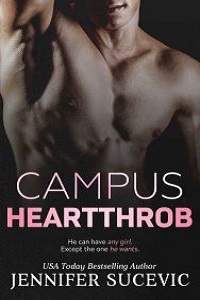 “Yo, Kendricks, grab me a cold one when you come back,” Asher Stevens yells as I walk into the kitchen.

I give him a one-fingered salute to let him know that I heard him loud and clear. That guy drinks like it’s his sole mission in life. By the time he graduates college this spring, he’ll be in desperate need of a liver transplant. Although, I’ve got to give him credit—he’s at the top of his game on the field. I have no idea how he does it. It’s one of the great mysteries in life that I’ve stopped trying to unravel.

With a yank, I open the refrigerator door and scan the shelves. What I find is a depressing sight. Other than a shit ton of beer and Gatorade, it looks more like a barren wasteland.

Don’t these guys realize that we live half a mile from the nearest grocery store? Hell, with a few taps on their phone, groceries would magically appear outside the front door.

We’re all supposed to be pitching in with the domestic chores. One look around this place will tell you that isn’t happening. The toilet on the first floor resembles a sketchy Chia Pet. Plus, it smells like the penguin house at the zoo.

I avoid it at all costs.

With a grumble, I pull out one of the last bottles of water and twist off the top before guzzling down a quarter of it. Then I grab a Miller Lite for Stevens. I’ve tried broaching the subject of his alcohol consumption a few times, but it’s not like I’m his mom. The dude is twenty-one years old; he can do whatever the hell he wants.

Carson, one of the other guys who lives here, saunters in as I slam the refrigerator door closed.

Carson Roberts and I go way back. We’re talking elementary school. He’s practically part of the family. The brother I never had but always wanted. He was there when I needed him and got me through one of the toughest times in my life. Even at twenty-one years old, I realize that friends like that aren’t easy to come by.

Football is what we originally bonded over. We’ve been playing together since second grade. First, flag football before moving on to a middle school team and then high school. Luckily, we both ended up at the same college and roomed together freshman and sophomore years before finding a house with a couple of teammates. Like me, Carson will enter the draft in the spring. He’s one of the best tight ends in the conference and was an All-American last year. The guy is one smart motherfucker.

Before I can open my mouth, he says, “Heads up, Kira just walked in.”

A groan escapes from me.

That girl takes crazy, psycho stalker to a whole new level. It’s almost as impressive as it is frightening.

Scratch that. It’s just plain frightening. There have been numerous times when I’ve come home, afraid I’d find our pet rabbit boiling away on the stove.

Just kidding, we don’t have a bunny.

You get the point I’m trying to make. It’s fucking scary. And she won’t leave me alone. I’ve tried everything, going so far as to tell her that it’s never going to happen between us.

I mean, come on. Of course it’s not going to happen!

I’ve never even locked lips with this chick, and she shadows me around campus and turns up in my classes. I’m this close to taking out a restraining order. The girl needs to move on. Or move away.

For the most part, I’ve enjoyed my time at Western University, but it’ll be a relief to get the hell out of here after graduation. There’s only so much of this crazy behavior I can put up with.

Carson’s shoulders shake with undisguised mirth. “That’s what you get for being so damn pretty.”

“Fuck off,” I mutter. Just because he’s a good friend, doesn’t mean he won’t give me shit.

He shrugs. “Hey, I’ve got an idea. Take her to bed and show her that you’re not as amazing as she thinks you are. Aren’t you notorious for your starfish impersonation?”

Not offended in the least, a smile breaks out across his face. “You know what you need?”

My stoic silence doesn’t stop him from continuing. “A girlfriend.”

I have zero interest in one of those. Especially right now. I’ve got enough going on with school and football. This is a big year for me. The season is underway, and, so far, we’re number one in the conference. The goal is to take home a championship and win a bowl game. That would be an amazing way to end my four years with the Wildcats. Then I can turn my attention to the NFL with the combine and draft in the spring.