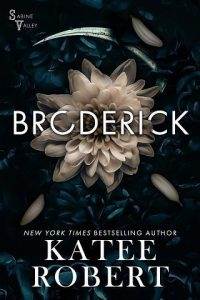 I always knew it would come to this. Handfasted, not to the woman I want, but to the heir to the Amazon faction. Linked to the enemy for a year in the most intimate way possible, all for the sake of revenge.

Monroe Rhodius stands next to me, her silence doing nothing to detract from the danger rolling off her in waves. She’s gorgeous, of course; all the ruling Amazon family is. Long blond hair; pretty, green eyes; and a mouth painted blood red. She only comes up to my shoulder, which is the most surprising thing about her.

Given her reputation, I thought she’d be bigger.

She’s also not dressed in any kind of formal wear like so many of the others here to celebrate Lammas. Instead she’s wearing a pair of cutoff shorts and a cropped white shirt that shows off a toned stomach and equally toned arms. Judging from the scrapes and bruising on her knuckles, she fought tonight. Whoever her opponent was didn’t get in a single shot at her face.

All around us, the arena seethes with rage. We’ve just accomplished the impossible—a mostly bloodless coup of the Raider territory, a claiming of Brides across all three of Sabine Valley’s factions. The first step in a revenge seven years in the making.

It feels like the handfasting ceremony occurs between one blink and the next. The Herald says the appropriate words and then wraps a length of pretty silk around my and Monroe’s forearms, binding us together.

There’s no going back now.

My older brother, Abel, leads our group through the crowd to the waiting trucks. Seven Paine brothers, our seven Brides—eight Brides, now that Abel has had his way. My brother has plenty of faith that no one will break the code of the feasts and sink a dagger between our shoulder blades, but he’s never let faith get in the way of reality. Now that we’re actually here, I’m glad for his plan to leave immediately. Raider, Amazon, and Mystic alike brim with fury and violence as they watch us whisk away the heirs to their respective thrones, as well as the favored among them.

Feast days in Sabine Valley are supposed to be sacred and free of non-sanctioned violence. A way for the three factions to iron out any wrinkles and keep war from the city. It’s a pretty fantasy. The reality is that all the codes and rules and traditions don’t mean shit.

They sure as hell didn’t save us when all three factions came together in an attempt to stamp the Paines out of existence.

It’s only when we’ve piled into the back of one of the trucks that Monroe breaks her silence. She gives me a slow smile that feels more like a threat than an expression of joy. “Bold move, Broderick Paine. You’re going to live just long enough to regret claiming me as your Bride.”

I already regret it.

Not the theatrics. They were necessary. Arriving back in Sabine Valley during the feast of Lammas, one of the four times when the city’s three factions come together in a ritual designed to maintain peace.

Abel stepping into the ring and issuing his challenge—seven fights, a Bride the reward for each victory.

Each of us taking Brides from all three factions, and forging a forced peace as a result. The tradition of Brides is just as old as the tradition of feast days. A long time ago, it used to be the way people forged alliances and navigated tricky moments in Sabine Valley history. A handfasting between one party and a Bride ensures peace for a year. No one connected to either party may move against each other without bringing the entire city down on their heads in retribution.

By taking Brides from all three of the ruling families, we’ve ensured no one can touch us for the next year. Technically, we can’t move against them, either, but it’s more than enough time to get our roots in deep and prepare for the coming confrontation.

If we survive this year.

The problem with taking Brides from the enemy factions? It means we’re essentially married to that enemy, that we’ve invited them into our beds and our lives.

The peace between factions only holds as long as the handfasting does. If one of us fucks it up, we’ll bring war down upon the Raider territory before we’re ready for it to happen. Which means we have to get along with our Brides, no matter how much Monroe looks like she wants to take a literal bite out of me.

I stare at my new Bride. I’m not as hard as some of my brothers, nowhere near as cold as others, but I’ve survived eight years of exile and put scars on my soul that will be there until the day I die. She might be dangerous, but the sad truth is I’m plenty dangerous on my own. “Cross me, and I won’t be the one who regrets it.”