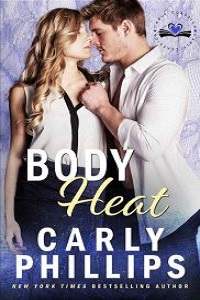 The days were hot but, thanks to her, his nights were even hotter. He welcomed the mixture of anticipation and desire that rushed through him as he looked around The Sidewalk Café. As he looked for her.

Jake Lowell clasped his hand around a chilled glass of ice water. The condensation left his palm cold and wet, in stark contrast to the New York City heat and humidity pulsing around him. In opposition to the inferno raging inside him. Nothing could extinguish the flame she’d ignited.

He leaned forward in the wrought-iron seat, shifting, trying to find a comfortable position for his back against the hard metal, one that wouldn’t put pressure on his left shoulder and the injury that had finally begun to heal. He shifted again, and pain shot through his upper body. Damn fancy chair. Outdoor cafés with sissy drinks weren’t his thing, they were his sister’s. But ever since he’d come here for the first time, ever since he’d taken a look at the sexy waitress with the compelling gaze, he’d forced himself to endure.

Jake glanced around, but the woman who starred in his fantasies was nowhere to be found.

Only a few couples graced the outdoor section of the restaurant. He looked at his watch. Typical of his sister, Rina, she was already fifteen minutes late. After a childhood of sharing one bathroom with a teenage girl, he’d become used to waiting for her; he’d be shocked if she showed up on time. But with the guy who shot Jake wandering the street, Rina’s lateness—typical or not—made him wary.

He took in the empty street once more, then turned toward the inside of the nearly empty restaurant and bar, reminding himself that the scum was now living a so-called clean life and that his sister was safe. He headed inside, figuring he’d wait for Rina in front of the television set and a good Yankee game.

That was when he saw her—his vision in white jeans and a black tank top with an apron tied around her waist. She stood by the bar, a bottle of water in hand. Her auburn hair had been pulled back in a ponytail while stray strands resisted confinement and curled around a face with delicate, angelic features. More than lust or desire, it was the purity in her expression and the smile on her lips that lured him back to this place, to her, over and over again.

After reading an order off her pad, she shoved it into her pocket, and the bartender got busy mixing drinks. Jake rose from his seat and walked to the open sliding glass door that led to the inside of the restaurant. She leaned against the wall and glanced around—looking for what, he didn’t know. Then she tipped her head backward and ran the bottle over her forehead, down one cheek and then the next, until she finally eased it over her long neck.

As the bottle moved over her skin, he swallowed a groan. Her back arched and her breasts pushed against the black tank. Taut nipples teased both the fabric and his restraint. He ought to feel like a voyeur, yet her every sensual, seductive movement seemed as if it had been choreographed for his eyes only.

Though she was a stranger, he felt as if he knew her intimately, yet not intimately enough. Eyes shut tight, her shoulders dropped and her muscles relaxed. As the cold plastic touched bare skin, her long sigh echoed inside him. Whether aware or not, she’d aroused both his curiosity and his imagination.

What would she taste like? he wondered. Would he find her lips moist, her mouth flavored with mint? Or would she taste sweet, like the coffee drinks served here? And in the throes of passion would she meet his gaze or shut her eyes in expectation and pleasure? Just imagining making love to her had his body strung tight with need and his soul on fire. He took neither lightly.

Little had piqued his interest other than the incident that had sidelined him and taken down Frank Dickinson, his best friend and fellow detective, causing Jake to rethink his direction in life. But desire licked at him now, hotter and with more force than the bullet that had seared his skin.

Neon lights over the bar reflected off the droplets of water on her flesh. He wanted to taste her damp heat, to absorb it with his body. He broke into a sweat that had nothing to do with the heat wave outside. His hand had turned wet from the condensation on the glass, and he wiped his palm on jeans that had grown too tight.

She straightened and placed her bottle on the bar before glancing around the confines of the small restaurant. He held his breath, but she didn’t look in his direction. Then she grabbed a napkin and blotted the glistening skin on her chest, patting downward to where droplets had probably dripped into the V of her cleavage, nestling between her full breasts.