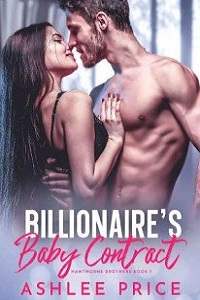 The woman in front of me smiles from ear to ear, her thin, scarlet lips the same shade as the nails pressed against her glass of champagne.

It's funny. I was told this party was only for family and stockholders, and she isn't either one - at least, not the last time I checked. Yet here she is. Someone sneaked her name onto the guest list, and I know exactly who.

"Thank you," I answer politely.

Regardless of whether or not I was expecting to see her, she's a guest of the Hawthornes now. And we always treat our guests well.

She touches my arm. "So how does it feel to finally be the man running the show? I bet it must feel good to be free of Daddy's shadow."

If only that were true.

"He's still on the board so he'll still have a say in things," I reply as I glance at the man with the salt and pepper hair chatting with a couple near the desserts table. "But I do get his office."

"Fantastic," Sabrina gushes as she fidgets with the opal pendant resting at the top of her cleavage. "I love a man with a huge desk."

Something tells me that's not the only thing she likes huge on her man.

She puts a finger on her chin as her lips form a circle. "Ooh, I like it. Hard and made to last."

Okay. No more of this. I've spent two minutes with her and managed not to scoff or sneeze from that perfume she seems to have bathed herself in. That should be polite enough.

I straighten my tie. "If you'll excuse me, I have some old buddies I need to talk to."

I start to walk away but she grabs my arm, latching on like a barnacle on a whale.

"I'd love to sit down and have a talk with you sometime, too," she tells me with a gleam of mischief in her teal eyes as she presses her breast against my elbow. "You know, CEO to CEO. I could even give you some tips. I could get us reservations at this amazing restaurant that serves even better salmon than was in those hors d'oeuvres I had tonight."

Those crostini toasts with turnip cream and fennel foam that were prepared by a Michelin-starred chef?

"That was actually tuna," I tell Sabrina as nicely as I can.

"And as much as I appreciate your offer, I'm afraid I'm going to be very busy from now on, as I'm sure you understand."

She steps back and straightens her shoulders in an effort to regain her dignity. "Yes, of course."

I make my way to the bar where my brothers are parked. I grab the martini glass in front of Asher and gulp its contents down, hoping the bitter liquid will wash away the unpleasant taste of my conversation with Sabrina.

"One Scotch, neat," I tell the bartender after setting down the empty glass.

Asher studies it. "That bad, huh?"

Asher glances over his shoulder. "That kitty in silver does look like she's got claws. Think she'd rather rake them down my back?"

I roll my eyes at my brother. He's just three years younger than I am, but I swear he sometimes acts like a teenager, especially where the opposite sex is concerned.

Women are like math problems to him. He takes an interest. He enjoys trying to figure them out, find out which formula applies to each one - usually sleeps with them in the process - and then when he has the answer, he sets them aside and moves on. I mean, you solve a math problem once and there's nothing more left to do with it except to leave it and let someone else have a go.

I've tried to set him straight, of course, but Asher's got a mind of his own. Besides, it's not entirely his fault. Women throw themselves at him. My hope is that one day there will be a woman who won't, someone who's complex enough that he won't be able to figure her out easily and will never get tired of trying. Until then?

"Behave," I remind him as I take a sip of my Scotch.

I have no idea what he's talking about. I've never handed him any of my stuff except for my Montana Hummingbird guitar, which he begged to have.

"But Dad sure is persistent about you settling down, huh?" Asher asks.

I frown. I'm not sure "persistent" quite cuts it. I was actually worried that he would refuse to hand over the company reins to me unless I had a wedding ring on first. I'm glad that wasn't the case. Still, he made it very clear that he wants an heir to Hawthorne Holdings as soon as possible. Hell, he's even shoving women in my face, hoping one of them will impress me enough that I'll marry her and get her pregnant.