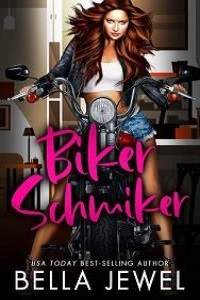 “MA’AM, ARE YOU LISTENING to what I’m saying to you?”

I blink slowly, tipping my head just slightly at the police officer speaking to me. He’s got a notepad in his beefy hand and eyes that are so dark they could almost be black and yet ... I find him weak - boyish, not someone I’d want on my side if I was in some sort of trouble, that’s for sure. Poor guy, perhaps he got picked on as a child and this was his way of regaining control?

When did I become so judgy?

After all, I am the one in a police station after being arrested for arson.

They’re wrong, though. I didn’t do it.

I know just who aimed the blame at me—that good-for-nothing, pain in the ass biker that took over my life, the garage next door, and stole all my sanity. He thinks he’s winning the war by pinning this on me, but he’ll come to find out, I can play a whole lot harder.

The cops might be scared of him. I certainly am not.

“I’m listening to you, sir,” I say, my eyes all doe like and my lashes fluttering as I blink innocently. “I just don’t understand why you think I had something to do with this.”

“Ah, Cash Riggs reported you, said he saw you light the fire in his garage. This was confirmed by two other members.”

“Firstly, with a name like Cash Riggs I’m surprised anybody is taking him seriously, and, secondly, I’d never enter that garage. Have you any idea what goes on in there?”

The officer, who I can see is named Billy, narrows his eyes. “I’m unsure what you mean, miss.”

I lean forward, letting my eyes dart from left to right before focusing on him. “A lot of sex, officer. So much of it, that I’m not sure how they’re even walking with the amount of STDs they’re sharing around in there. Don’t get me started on the alcohol, and drugs ...”

I nod ferociously. “You don’t think bikers are just fixing cars in that garage, do you? Gosh, no. They’re selling drugs. Heaps of them. To my customers.”

Probably not true, but it wasn’t true that I started that stupid fire, either, yet here I am.

He watched me get dragged away by those police officers, with hate in his eyes. He thinks I did it, but deep down I’m certain he knows I didn’t.

Riggs should have been more careful who he messed with.

“Have you any proof of these transactions?” Billy asks.