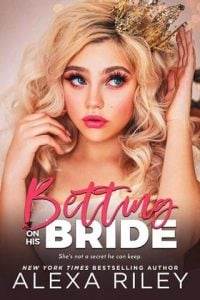 This whole life thing isn’t going the way I thought it would. As excited as I am for the next chapter of it, I’m honestly not sure how ready I am for it.

“Come on, don’t you want to see?” my older sister Amelia asks as we stand in front of the Rockford Building. She’s holding one of my boxes in her arms as I look up at my new home.

A doorman who looks like he could double for a security guard opens one of the glass doors for me. We already had to go through a security gate to get onto the premises, and I noticed that this building was the only one that had that. It sits on the edge of Royal Rose University campus, and I see why my parents picked this place for me. Not only because it’s safe but because of my own issues.

“Is there a problem?” Felipe, my sister's husband, joins us with boxes in his hands as well.

They were the ones to pick me up today and grab the last of my things. My mom had been gradually moving my stuff over for the past few days. She and Dad are already here, and I’m sure my mom is up there right now pacing back and forth and asking my dad why I’m not here yet. She’s been bursting at the seams to show me my new place. My mom doesn’t do anything small when she has her hands involved. Especially when it comes to her children.

“No problem. Mara is just taking it in,” Amelia responds for me, knowing how I can be.

I’ve never been great with change, and this is a big one. One I didn’t see coming. Typically, this isn’t how things work for us. I don’t understand why it’s so different for me, but I don’t say that. The last thing I want to do is make waves. So many other people would be grateful for this, and I don’t want to come off as a spoiled brat.

I also know a part of me is scared to hear the truth about why this is my path and I hadn’t followed in my mom or my sister's footsteps. I’ve so badly wanted that, but I suppose that maybe no one wanted me. That’s the thing I fear, so I didn’t ask why a husband hasn’t been selected for me.

“It’s pretty.” The restored stone building screams of history, just like all of Royal Rose University.

“I bet you Mom got you one of the units with the rose vines.” Amelia nods toward them.

“That’s not a bet I’d take because you’d be right.” Part of it has beautiful rose vines that go all the way up to the top of the five-story building.

I start walking before people begin to stare and wonder what’s wrong with me. “What floor am I on?” I ask when we enter the building and I spot an elevator straight ahead and the stairs to the left.

“I’m not new around here,” Felipe says as he follows her, and Amelia shoots him a smile.

They’ve been married for over five years now, and it’s true. Felipe knows about a few of my quirks and that it’s easy for me to get freaked out. I’ve spent a few summers with them, and he can tell when my imagination gets the best of me. Normally I spend my summers with my older brother Cillian out at his home in the country, but since getting married, he travels with his wife Glenda, something he’d never done until he met his wife.