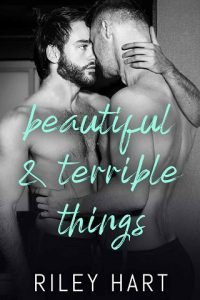 “Why are you so small? Even the girls are bigger than you.”

“Dunno.” I shrugged. It was the first week of school. There were three of them, standing in front of me and waiting for an answer about why I was the way I was. How was I supposed to know?

They laughed. I tried not to cry. If I did, that’d really make me a baby. That was what Dad always said. “How’d I end up with such a little baby for a son? You’re too soft, too weak. I sure hope you grow out of this shit.” I guessed if Dad and these guys thought something was wrong with me, they must be right, so I just stood there and took it the way I took it with Dad.

They started laughing harder, and I tried to make myself even smaller, hoped I could shrink in on myself until there was nothing there. Wished I was up in the sky—not like dead or anything; I just liked the stars.

“Leave him alone.” I turned toward the new voice. His name was Gage. He was in my class. He had dark, messy hair and holes in his shoes. You could tell his clothes weren’t new like everyone else’s. “You’re just jealous ’cuz he’s smarter than all three of you put together.”

The guys grumbled. “Nuh-uh. You’re stupid,” one of them replied.

“Whatever. Just leave him alone. His daddy is a police officer, and he’ll arrest you!”

Oh…why hadn’t I thought of that? To use who my dad was that way, but then, I wouldn’t have wanted it to get back to him. I wanted to be strong like he was.

All three boys’ eyes widened. “Whatever. We don’t care about him anyway.”

“You’ll have to deal with me if you do,” Gage replied, making my pulse shoot up to the sun.

The guys mumbled another whatever and walked away.

Without a word, Gage turned to go the other direction, so I said, “Wait.”

He stopped, turned, and looked at me. “Yeah?”

His cheeks turned a pretty shade of pink, as if he was embarrassed I thanked him.

I liked pink. I didn’t know why more boys didn’t seem to like it, why they called it girlie or made fun of boys who wore it.

I didn’t like mean people either, but I still wouldn’t have said anything to them. He gave me a shy smile. I only knew it was shy because mine always were, and it reminded me of that—the way my eyes darted away when I did it. I bet all my smiles at him would be that way.

He started to walk away again. “Hey!” jumped out of my mouth. Courage seemed to rise in me out of nowhere. Maybe somehow, I was taking it from him, like it radiated off him and penetrated my skin, my muscles, my bones. “Do you wanna be friends?” I asked just as the teacher said it was time to go in from recess.

Butterflies danced around in my belly, tickling me. Maybe that was something weird about me too, so I tried to shoo them away as I walked over to him.

We went into the school together, and later that day when we got to work with partners, Gage came right over to work with me.

“Mr. Beaumont, if you expect to pass fifth grade, you need to be working a lot harder,” I heard Gage’s teacher tell him as I waited for him. “You don’t turn in any of your homework.” We weren’t in the same class this year, and it sucked. Still, we spent all our time together. We walked to the bus together at the end of the day, and sat together until my stop, which was before his. Gage lived farther out of town. The biggest stretch of time we spent away from each other was during baseball season. Gage was really good. My dad liked that about him. It was the only thing he liked about Gage. Most of the time he said he was a hoodlum with a criminal for a dad.

“Is there anything you want to tell me?” the teacher asked Gage. “Are there problems at home?”

People always thought Gage’s dad was up to no good. While he drank too much, he never did anything bad that I knew of. He didn’t say the kind of things to Gage that my dad sometimes said to me. He did get arrested a lot, though. Sometimes he let Gage stay at home by himself all night, or even longer, but Gage said I couldn’t tell anyone about that, especially not my dad.