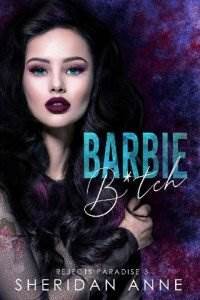 The sharp edge of the broken wine bottle slices through Jude’s flesh and that very first scream of agony is enough to send satisfaction pumping through my veins. The heavy metal door slowly closes and rebounds off the lock with a loud, sharp bang, leaving it propped open with a sliver of light shining through Jude’s cold, dungeon.

If I was smart, I'd open the door wide and leave a way out, somewhere to run and make a quick getaway, but not today. All senses of right and wrong left me the second I saw his face.

I won’t be walking out of here until this is done. Revenge is a dish served ice-fucking-cold.

No one gets away with putting their hands on me. I’ve allowed Nic to walk all over me for too long and I won’t stand for it anymore.

From now on, I walk on my own two feet and I do it with pride. I deal with my problems, and I will be the one to right the wrongs made against me. I’ve always seen myself as strong, but I was anything but. I was weak. Defeated. Scared.

Never again. I don't care how sick this makes me. I don't care if it puts me on the same level as Nic. I'm ending this and I'm ending it now. I'm tired of looking over my shoulder and seeing his face in every shadow. I'm sick of remembering the way his hands felt against my body or the way he tore my dress and left me completely defenseless to take what he wanted.

“Fuck, you little bitch,” Jude growls low, his teeth clenching as he pulls hard against the chains keeping him hostage. Blood pours from his thigh and a maniacal grin spreads across my face.

I tilt my head and let my eyes sparkle with excitement, showing him just how fucked up I can be. “What's wrong, Jude? You don't like that? You don't like me taking whatever the fuck I want?”

“You're fucking insane,” he spits at me as I spin the broken wine bottle in my hand and step closer to him, watching as he desperately tries to pull away, scrambling across the cold concrete floor.

A laugh bubbles up my throat. “You know what's fucking insane?” I taunt, brushing the broken glass over his skin, teasing him with the power I hold and loving the way his eyes follow my every little movement. “Thinking you can drug and rape me then walk away without punishment.” I lean in, pressing the jagged glass a little harder into his skin and grinning as I pierce it. My voice lowers to a sadistic, twisted whisper. “That's not how this little game is going to play out.”

“You won't get away with this,” Jude says, his eyes wide and terrified. “My father is going to find out and he's going to have you committed. You'll never walk this town again. You're going to wish you were dead.”

“What's that I hear?” I laugh, tearing my hand back and watching the glass slice through his delicate skin like a warm knife through butter. He cries out and the satisfaction pulsing through my body intensifies. “Hiding behind Daddy's power, money, and sick morals again? But guess what? He can't hear you scream down here.”

“I'm fucking sick?” I grab his shoulders and slam my knee up into his junk, then step back to watch as he falls to the ground, doubling over in agony. He lands in the puddle of blood at his feet and for a slight second, I'm thrown back to the Black Widow's warehouse, watching as two murderers died by the hands of my so-called best friend. They too collapsed into pools of their own blood, right before Nic introduced me to his dark side.

Looking at Jude's pathetic self laying in agony at my feet, I finally get it. Without hesitation, I'm going to end him just like Nic had done to those who had wronged him and I won't stop until the job is done. I deserve peace. I've only been living with this for a few weeks, but what about the other girl he hurt? She's been living with this for who knows how long? She deserves justice just as much as I do, if not more. They laughed at her and claimed she was a liar. They disregarded her pain, embarrassment, and shame.

I won't let him get away with it any longer. People like Jude need to realize that their money won't always speak louder than their crimes. If justice won't get served in a courtroom, then it sure as hell will be served in this old, secret room in the back of Charles' private wine cellar.

I kneel, watching him writhe in pain. “You're scum, Jude Carter. I'm going to enjoy ending you.”