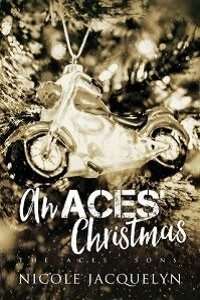 “I’m nervous,” I muttered, glaring at my husband as I tore off another shirt and threw it on the bed. “Why the hell am I nervous to see my own son? I’ve seen him every fucking week for the last three years and nine months.”

“You’re not nervous to see him,” Cam replied, shaking his head. I paused to watch him pull a flannel over his undershirt, his fingers moving to each button unerringly, even though his eyes were on me.

His hands weren’t shaking the way mine were.

“You’re nervous that we’re gonna get there and they’re gonna say there was some sort of mistake and not let him out.”

I dropped to the edge of the bed as the truth of his comment sunk deep. He was right, as usual, but it didn’t irritate me the way it normally did. I was too busy being stunned that he’d actually said the words out loud. It seemed like it would jinx things somehow. Now that the words were out there, floating in the universe, my fear tripled.

“It’s gonna be fine,” he assured me, coming over to run his fingers through my hair. “It’s all gonna go off without a hitch, and your dad’s gonna bitch at me for weeks for havin’ you on the back of my bike.”

I scoffed as I stood back up. “He can fuck right off if he thinks I won’t be there when my son breathes fresh air for the first time in years.”

“I’ll let him know you said that,” Cam replied, grinning. He gestured to the bed covered in discarded shirts. “Wear the green one. It makes your tits look great.”

I stared at him in disbelief and shoved him toward the doorway. As soon as he was in the hall, laughing, I shut the door in his face.

“I don’t care how my tits look today!” I yelled.

“I always care how your tits look!” he yelled back, before I heard him stomping down the hallway.

Facing the bed, I sighed and randomly picked up a sweater and pulled it on. It wasn’t the green one. I wouldn’t give that lecher the satisfaction. Looking down at myself, I smiled. I didn’t believe in holding onto clothes that didn’t fit or were no longer flattering. My tits looked good in anything I owned, thank you very much.

I curled my toes into the carpet as I made my way toward the master bath. The feeling centered me, but my hands still shook.

I was scared that somehow, some way, they would tell us tough luck, that my baby boy wouldn’t be coming home with us. And that wasn’t my only fear, not by a long shot. I worried that he’d be different. That the short visits we’d had every Sunday for far too long hadn’t been enough to really know my own son. That he wouldn’t be the same thoughtful, caring, pain in the ass he’d always been. That he would have a hard time adjusting to life on the outside, and I’d find myself watching him go back inside. I was terrified that if he did go back inside, I wouldn’t be able to stop his other half from following him there and next time, I’d lose both my sons. Alternately, I was afraid that the bond between my twin sons would never be the same, like their connection had changed the same way their looks had with the time apart.

My boys were identical and they’d looked it. Sometimes, they had different haircuts, and Draco’s acne had been worse than Curtis’s their entire eighth grade year, but if you didn’t know them, they were impossible to tell apart.

I shook my hands out and reached for a brush, smoothing my hair back to the nape of my neck so I could braid it. After we got home that afternoon, I’d let it hang loose, but I was too anxious to deal with it flying around my head when we were on the bike. A quick glance out the window told me the sun was still out—an unexpected bonus on December 23 in Oregon. At least we wouldn’t have to ride in the rain. That was one less thing I had to worry about.

“Let’s go,” Cam said a few minutes later, swinging open the bedroom door as I pulled on my socks.

“We don’t have to leave for fifteen more minutes,” I argued, checking the clock.

“Baby, it takes you exactly fifteen minutes to leave the house.”

“It does not,” I said, glaring at him. The argument was almost as old as our relationship.

“It does,” he said in exasperation. “No shit, fifteen minutes on the fuckin’ dot. Started when the boys were born—and I got it then. Gettin’ two babies outta the house is a nightmare. But once they started standin’ at the door waitin’ on your ass, it got a little old.”