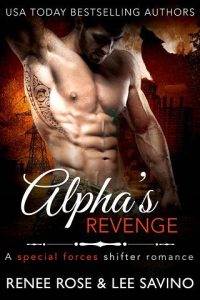 Moonlight glints off the black surface of Lake Como. The villas and their private estates are all silent as I slink past cypress trees and neatly trimmed boxwoods to my destination.

“Alpha One, are you in position?” Channing’s voice is a whisper in my earpiece.

“Not yet,” I mutter into the tiny microphone transmitter embedded in my collar. I’m wearing nothing but a stretchy black bodysuit that will allow me to shift into a wolf if I need to. If all goes to plan, I won’t need to.

In the meantime, I look like a cat burglar. Which is appropriate. Tonight I’m a thief, and the target is the eighteenth century villa built into the side of the mountain.

Gabriel Dieter's Italian mansion has layers of security. The first is its location in a secluded section of Lake Como. There’s only one road in and out, and it’s heavily guarded. But the guards are human, and somehow Colonel Johnson, the shifter commander who greenlit this op, learned their nightly route. I have two minutes to give them the slip and get down to the lake water. I already bypassed the guards, so now it’s time for me to swim.

The lake laps at the rocks, a gentle lullaby greeting me. I slip into the water and grit my teeth against the chill. My wolf doesn’t really like the water. Werewolves are heavy and swimming isn’t easy. I swim in smooth strokes and keep to the shallows until the walled fortress of Dieter’s home is ahead. When I take to land again, I give myself a good shake and fling the water off me like a wolf. I’ve yet to find a more efficient way to dry off.

“Approaching the house,” I breathe into my comm. I take a running leap and twist as I clear the top of the wall. I land silently on my feet.

“Do we need the diversion?” Channing asks.

“No.” A disturbance at the border of Dieter’s land would draw guards, but result in more heat. The further I can get without alerting Dieter to a security breach, the better.

“Incoming,” Channing mutters in my ear, but I'm already turning. My wolf scented the new arrivals: thick-bodied guard dogs racing my way. Rottweilers. I let out a growl and bare my teeth, letting my wolf greet them. The dogs stop in their tracks, realizing they’ve met a bigger predator. Something about my alpha presence makes their primal senses overwhelm their training. Challenging and soothing them all at the same time. They tilt their heads to show their necks and shy away when I stride forward.

I lope across the dark lawn to the house. There are no motion sensors in this area, probably because they don't want them tripped by the dogs. Mistake. I circle the house until I’m below the shining glass addition to the villa, the one modern touch in the centuries old architecture. Gabriel Dieter’s office.

I find toeholds in the stone wall and scale the sheer face of the house until I'm on the roof. Here, I can make my way closer to the glass cupola. “Almost in,” I report. I have a glass cutter attached to my belt, but as I creep along the tiled roof, I spy an open window in one of the eighteenth-century towers. I scale the turret, climbing blind with my fingers searching painstakingly for holds. A breeze rises off the lake and chills my exposed skin. At last, I hug the stone, having climbed level with the open window. I push the ancient glass very carefully. Sure enough, it’s unlatched.

I slip through the open window and step into a hall. “I’m in.”

Trepidation trickles up my spine as I pad through the hall towards Dieter’s office. Dieter is a paranoid sonofabitch. According to our reports, he sleeps in a safe room every night. His preferred home base is a fortress in the Swiss Alps. We tried spying on him there, but somehow he found out and sicced a small army on us. Since then, he’s gone underground, hiding in a hole too deep for even Colonel Johnson’s sources to find. Until last week, when we got reports of him staying here, in his Lake Como residence. This place isn’t as secure as his mountain chalet, but it’s belonged to his family for centuries. He must have arranged to meet someone here—probably a warlord or terrorist leader or similar customer hoping to buy Dieter’s illegal arms.

I push my wolf’s unease away. The only thing bigger than Dieter’s paranoia is his conceit. He probably wanted to meet his customers here to impress them. This hallway is lined with priceless artifacts, enough to fill a small museum. I creep past giant gilt framed paintings, Greek statues, a Ming vase. This guy hoards treasure like a dragon. Who knows what other valuables are locked in the vaults below this house?