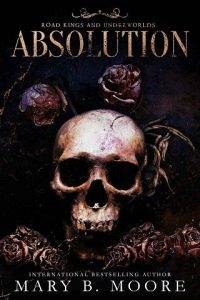 Seven and a half months ago…

I had my eyes on the form in front of me as I rounded the corner to where I could hear my brother Hunter talking to someone.

It wasn’t until recently that Dad had allowed me to come to the clubhouse, so it still didn’t feel real being here. According to him, there was a difference between a son and a daughter when it came to being in an MC and being around it. So my hours were limited, and I had to make my visits planned to get the work done for them. Twisted thinking, but it is what it is.

“—wedding on Saturday? Well, I’ll definitely be there to see it. I mean, you getting married. That’s got to be witnessed, man.”

Looking up, I froze when I saw who he was talking to—Taras Fedorov, the son of the head of the Fedorov Bratva. He was a Vor, the next in line to head the Fedorov brotherhood.

And the man who I’d secretly been dating for eight months.

My unexpected appearance didn’t go unnoticed by him, either. His reaction much the same as mine as he looked at me over my brother’s shoulder.

Seeing his distraction, Hunter turned to see who was behind him.

“Did you manage to find it?” he asked, talking about the order form that I’d had to turn the office upside down for.

Holding it up, I stayed silent as the words, “You getting married, that’s got to be witnessed, man,” rolled around my head. I felt sick and like someone was stabbing me in the chest, because I had no doubt the marriage they were discussing didn’t involve me.

I might have been sheltered from the MC, but I knew how the Bratva and Club worked—your duty was to your family first, and everything else came second. If I’d been part of the upcoming nuptials, there would have been a big celebration, and further formalities about tying the two families together.

No, the man I was in love with wasn’t marrying me. I also knew that he hadn’t intended for me to find out. At least, not like this.

We were supposed to be leaving at 6 AM to catch a flight for a two-week vacation to the Bahamas. He’d been the one to insist on and plan it, making me promise I’d go. Now that I’d heard this, I knew there was another reason he didn’t want me to be in the country while he married another woman.

Coming unstuck, I looked away from him and over at my brother, who was watching me closely.

“Yeah, I went through everything and found it. You and Dad really need to organize that mess you call an office.” Then, glancing briefly at Taras and forcing a small smile, I muttered, “Hey, Taras. Nice to see you again.”

Not giving him a chance to reply, Hunter filled me in on a situation I didn’t want to know about. Hell, I didn’t even want to be here anymore, and it was taking everything in me not to run out of the building and go to the safety of my home where I could cry.

“Taras came to invite me to his wedding on Saturday. Wanna come as my plus one?”

The fact my brother, a man who lived and breathed the Road Kings MC, was saying the words ‘plus one’ would have been hilarious normally. But I could feel burning eating away at anything and everything inside me.

Did I want to witness the man I loved—the man who’d been inside me only four hours ago—marry someone else? No one would say yes to that.

“I’ve got something on,” I told him, the smile on my face feeling brittle now. “Congratulations, though, Taras. I hope you both have a happy life together.”

I saw out of the corner of my eye as his head jerked and he winced hearing the words. “Nell…”

Oblivious to the tension, Hunter snapped his fingers. “Oh yeah, you’re on vacation somewhere, aren’t you?”

No, no I wasn’t. Because the man I was meant to be going on it with had more than likely intended to ditch me at the airport, seeing as how he’d be getting fucking married two days after we left.

With a strength I didn’t know I had, I kept my eyes on my brother, a wall now forming around the man standing beside him.

“No,” I replied coolly, “that got canceled. I’m leaving tonight to visit a friend now instead.”

And I would be. In fact, the second I got home, I was packing a bag, and driving to Orlando to stay with my best friend, Lena.

Turning back to Taras, Hunter shrugged. “I’ll find someone, and I’ll tell Bruce about his invite, too.”

Not even bothering to say goodbye, I turned and headed back the way I’d come from, the burn morphing into an inferno inside me now.