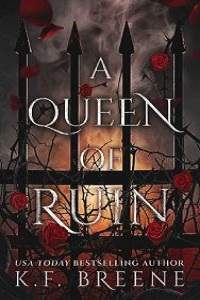 What in the absolute fuck? I thought as silence descended on the after-battle crowd. The prince stood at the top of the steps in jeans and no shirt, in front of the castle, staring down at his mother, the queen.

How the hell was she alive?

Well, obviously I knew how—she’d somehow escaped before the curse and hidden in the collection of dragon villages in the Flamma Kingdom, safely tucked away.

I didn’t know her story, and already I wasn’t sure I could forgive her. She hadn’t aged. In all this time, she looked exactly the same as the last time I’d seen her in the castle. So did her chief lady-in-waiting. The magic affecting us had obviously impacted them, too, but they’d gotten the fun antiaging side effect without having to pay the price. She’d hung out in that cute little village while her people were slowly dying or being indoctrinated into some pretty fucking weird sexual kinks.

Had the king known? Probably not. He’d never been much of an actor, and he’d convinced Nyfain his mother was dead.

It took Leala’s wide-eyed glance for me to realize I’d said that last bit out loud.

Almost like he’d been slapped, the prince jerked. Soon after, his body bristled and he unleashed a thick wave of stinging power. It washed over me and threatened to pull me under its tide. My wolf curled up inside of me and did the equivalent of a whimper. The queen flinched, along with almost everyone else in the room. Not Finley, though. Her eyes blazed as she stood beside the ferocious dragon prince. She was the only person in the whole fucking world who liked to bathe in his dominating power, the nutcase.

As if in response, a different sort of power suffused me. A calming magic full of steadfast strength, utterly unbreakable. It was a message of unity. Of pack. Of protection. Power in numbers.

Weston, the alpha wolf, was responding to the dragon’s fury. This was why strong wolf shifters and dragon shifters never really got along. Dragons liked to swing their dicks or tits around, and wolves linked arms and said, “Come at me, fucker!” Too much ego all around.

And now I was stuck right in the fucking middle of it, because my goddess-cursed wolf had connected with that alpha wolf and did not plan to let go. He wanted to join Weston’s pack. To belong. To bask in that sense of unity and try to muscle our strength to its full potential rather than remain a lone wolf curled up at the feet of dragons.

And while I got where the fuzzy bastard was coming from, I needed him to understand that Finley created unity just like that alpha wolf did, only she didn’t have to use wolfsong to do it. My loyalty to her had been earned by her actions alone, no magic involved. She would protect us just the same or better. She’d let us flower within her care.

He was not listening, the horrible cumgoblin.

Within Weston’s magic, my wolf slowly uncoiled. Adrenaline seeped through my blood and my back straightened. For the first time ever, I didn’t have idle thoughts of shitting myself within the prince’s hostile golden stare.

At least that was a nice change.

“Please,” the queen said, a small quiver in her voice. “Give me a chance to speak with you.” She must have felt all the eyes on her, and a lesser woman would’ve looked around at the spectators. But she’d learned mastery of her emotions after living with the late king. She’d had to. She’d had to be the people’s rock within the storm.

Right up until she left us.

She lifted her chin. “Let me explain, and then I will respect your decision about my fate,” she continued in a strong, even voice.

The prince clenched and unclenched his fists, his expression stony and his body straight and tall. Finley, though, let unease crease her expression. Her eyes darted between the prince and the queen, full of concern for one, anger for the other. The prince might not be showing his emotions, but she’d feel them through their bond. He probably didn’t want to hear his mother’s explanation for fear it would damn her, destroying his opinion of the woman who’d been everything to him. The woman he’d put above all the other people in his life.

I took a deep breath, my heart breaking for him. For all of us. The king had been a horrible bastard. I didn’t know if I could handle it if it turned out the queen had been just as bad. It would tarnish all my good memories of this place. Because she was the one who’d made it livable.

Fuck. I couldn’t believe this was happening!

The prince’s nod was minimal before he looked away, not sparing her any more of his attention. It was a slight to her position, both as the crowned queen and as his mother. It must’ve killed him to do it.